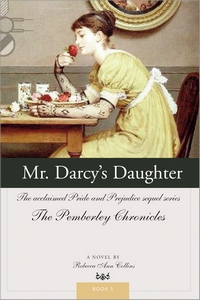 The Austen book sleuth is happy to inform Janeites that Austen inspired books are heading our way in November, so keep your eyes open for these new titles. Next month’s edition of upcoming releases of Austen-esque books will include my selections of Jane Austen inspired holiday gift giving suggestions, so please check back on December 1st.

Mr. Darcy’s Daughter: The Pemberley Chronicles Book 5, by Rebecca Ann Collins. The Pemberley Chronicles continue as author Rebecca Ann Collins carries on the saga of the children of the Darcy’s and the Bingley’s as she focuses on the daughter of Fitzwilliam and Elizabeth Darcy, the charming, beautiful and intelligent Cassandra. It is now 1864 and Cassandra Darcy must step forward and assist her family in the running of Pemberley after her willful brother Julian fails in his responsibilities as heir. “Mr. Darcy’s Daughter is the remarkable story of a strong-minded woman in a man’s world, struggling to balance the competing demands of love and duty as a daughter, wife, mother, and sister.” Sourcebooks Landmark, ISBN: 978-1402212208

The Lost Years of Jane Austen: A Novel, by Barbara Ker Wilson. Even though every reasonable attempt to discover information about the content of this book has been conducted, the Austen book sleuth is still stumped. So we shall call it the mystery Austen book of the month and make a wild guess that it is a reprint of Barbara Ker Wilson’s 1984 novel, Jane in Australia in which Jane travels to Australia in 1803 with her aunt and uncle the Leigh Perrot’s. Sorry if my hunch is off, but if publisher’s wont’ give a description on their web site or answer polite inquires, we are left to the mercy of a good surmise. Ulysses Press, ISBN: 978-1569756928

Eliza’s Daughter: A Sequel to Jane Austen’s Sense and Sensibility, by Joan Aiken. Did anyone catch that steamy opening scene in the Andrew Davies adaptation of Sense and Sensibility last spring on Masterpiece? If so, you might guess the parentage of the heroine Eliza Williams, but since she could not, she has no notion of who her father is or how she is connectioned to the kindly man who is her guardian, Colonel Brandon. Intelligent, creative and free-spirited, Eliza makes her way to London and into some of the fine intellectual and artistic circles with poets William Wordsworth and Samuel Coleridge eventually traveling the world, all the while seeking to solve the mystery of her parentage. My only hope is that she takes cousin Margaret Dashwood along on the adventure! Sourcebooks Landmark, ISBN: 978-1402212888

Issues of Class in Jane Austen’s Pride and Prejudice: (Social Issues in Literature), edited by Claudia L. Johnson. Jane Austen’s heroine Elizabeth Bennet was a middle class gentleman’s daughter and hero Fitzwilliam Darcy was from the upper-class landed gentry. Ever wonder why only the rumor of their engagement provoked Lady Catherine to say “Are the shades of Pemberley to be thus polluted?”, and what it all meant? This book will definitely fill in the blanks with its numerous essays from prominent Austen and 18th-century scholars such as John Lauber, Marilyn Butler, Juliet McMaster, Emily Auerbach and Claudia Johnson. Written for high school level students, I am quite certain that older Janeites will find these insightful essays worthy of further study also. Greenhaven Press, ISBN: 978-0737742589

Bloom’s How to Write about Jane Austen, by Catherine J. Kordich. The title of this one says it all, but here is my flip rhetorical question of the day. Since Jane Austen’s writing style is revered and worshiped by thousands (if not millions) including this blog mistress, who the heck would not want to know why her writing is so brilliant and be able to write about it??? Who indeed? I must confess that I could benefit from this book and hope to have a copy in hand shortly. Designed to help students (and blog mistresses) develop their analytical writing skills and critical comprehension, I know a few Austen friends who will smile at the title and snap it up in a heartbeat. Chelsea House (Facts on File, Inc.), 978-0791097434

Life in the Country:  with quotations by Jane Austen and silhouettes by her Nephew James Edward Austen-Leigh. Edited by Freydis Jane Welland and Eileen Sutherland, contributions by Maggie Lane and Joan Klingel Ray, afterword by Joan Austen-Leigh, designed by Robert R. Reid. Wow! The contributors to this book play out like the royal pedigree of Janedom! If you didn’t catch the connections, then I advise you to read the dust jacket flap. Suffice it to say, this is Jane Austen royalty rolling out the red carpet for our edification and enjoyment. The silhouettes are stunning, add to that well chosen Jane Austen quotes, a foreword from the editor, a family biography and an afterword by one of the creators of JASNA, and it does not get any better! Seek this one out and buy it. It is a gem. British Library, ISBN: 978-0712349857

Until next month, happy reading to all!

2 thoughts on “Jane Austen Book Sleuth: New Books in the Queue for November 2008”