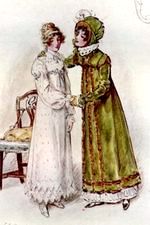 Mansfield Park was written between 1811 and 1813, published in 1814 and was the first novel that Jane Austen’s produced after a ten year hiatus. It represents a more mature style dealing with darker themes and a moralistic tone. It is quite a different novel than many of her followers have come to expect and seems at odds with her first two published novels Sense and Sensibility and Pride and Prejudice which were written as a young woman and reflect a lighter, more energetic and romantic stories.

This divergence may account for its criticism and disappointment from Austen’s faithful readers who expect yet another of her light, bright and sparkling novels and are instead given on first reflection a slowly evolving intricate story presenting thoughtful underlying themes and perplexing characters who often act at odds against our instinctive wishes.

The strongest adversarial criticism of the novel is with its heroine Fanny Price who has been tagged as weak, timid and ineffectual. Opinions on Fanny vary greatly and can ignite heated debate within readers of the novel. Other problems often lamented are with the hero Edmund Bertram who is said to be unbelievably too good and overly moralistic. Even though love and marriage is the motivation of many of the young people in the novel, it is a cold calculating affair with little romance and few happy moments. The reader is often as much at odds with the couples and they are with each other!

To say that Mansfield Park is the dark horse of Jane Austen’s oeuvre may seem extreme to some and accurate to others. However, this difference of opinion is not uncommon placing it in an interesting light. Anything that elicits such sundry and strong feeling deserves deeper investigation and understanding. Mansfield Park may have its ardent fans and fervent foes, but I am inclined to believe in Jane Austen’s motives and writing style, and enjoy it for its beautiful language, intricate plot and witty dialogue. Gentle Fanny deserves greater attention, and I am happy to comply.