Faith and food filled last week’s episode 5 of Downton Abbey after the devastation of the loss of Lady Sybil. As the family continues to mourn, the future of her baby and husband Tom at Downton are uncertain. Branded the scarlet woman of Downton, former housemaid Ethel’s return as Mrs. Crawley’s housekeeper has shocked the community. When Lord Grantham crashes a luncheon attended by the ladies of Downton at Crawley house, the ladies are united in their support of her rehabilitation and refuse to leave. On an upbeat note, Mr. Bates’ conviction has been overturned and he has been set free! Anna and Bates are now once again together and happy!

Recap of episode 6 (spoilers ahead)

Downstairs: All but one welcome Downton’s prodigal servant Mr. Bates back home with open arms! His return places interim valet Mr. Thomas Barrow in an untenable position and he must give way and let Mr. Bates return as Lord Grantham’s valet. This situation is quickly overshadowed by a sexual scandal that could taint the reputation of the estate as Miss O’Brien’s plotting to ruin Thomas comes to fruition when her nephew Alfred catches him making sexual advances at footman James late at night in his bedroom. After James’ continued complains to Mr. Carson, Thomas is forced to resign without references, ruining his chances for future work. Mr. Bates feels sorry for Thomas and offers his assistance with pressuring Miss O’Brien to convince James to recant. Thomas reveals a certain fact about her ladyship’s soap that immediately does the rick and her scheme is thwarted. This further angers her nephew Alfred who reports the incident to the police.

Upstairs: Matthew and Tom work together to develop a new plan to save Downton and make it self-sufficient. Robert’s resistance to change and his concern for his tenants is supported by his long-time estate manager Mr. Jarvis whose indignation results in his resignation. To stop the scandal that is Ethel, the Dowager Countess is determined to see her move elsewhere and secretly places an advertisement in the London paper for a housekeeper seeking a position. One of the replies is from a woman who lives nearby the home of the Bryant’s, the grandparents who now care for her son little Charlie. Violet orchestrates a reunion of Mrs. Byrant and Ethel so they can come to terms with her working nearby and seeing her son. Lady Edith has a new job as a journalist for a paper in London whose editor Michael Gregson is keen on her. She is cautiously interested until she discovers he is married. He reveals that his wife is a lunatic and there is no hope of him obtaining a divorce. Young cousin Lady Rose MacClare visits Cousin Lady Rosamund Painswick in London with Lady Edith and Matthew. Escaping to meet her married lover in a jazz club, she is caught in the act. Matthew controls her by bargaining with their silence if she will behave. The annual cricket match is in full swing when the local police arrive looking for a statement from Alfred who reported Thomas for criminal behavior against James. Lord Grantham intercedes and Alfred recants claiming to be drunk at the time. Now that Lord Grantham is on board with the new plans for Downton, Matthew and Mary are pleased to be building a new kingdom and making a little prince.

“Are you sure you wouldn’t rather cut and run like me?” – Tom Branson

I love the frankness of Tom Branson’s humor. The bromance between he and Matthew is one of the highlights on the series.

“I do think the women’s place is in the home, eventually. But I don’t see any harm in her having some fun before she gets there.” – Violet, Dowager Countess Grantham

Another great zinger from the Downton whisperer. 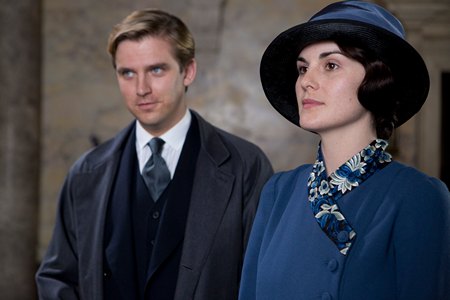 “You berate me for not taking responsibility and then you tell me off for doing just that. You can’t have it both ways.” – Matthew Crawley

I am relieved to see some genuine romance and less bickering from the love birds of Downton!

“Cousin Violet has never let an inconvenience stand in the way of a principle.” – Mrs. Crawley

“As the kettle said to the pot.” – Violet, Dowager Countess

Young Lady Rose’s introduction to the world of Isobel vs. Violet begins in a throw down. She laughs it off, but she won’t be laughing later! 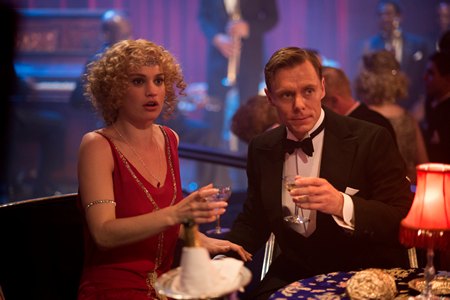 Best line of the night!

“There must be something you know about Miss O’Brien that you can use against her.” – Mr. Bates

“Well, then give me the weapon and I’ll do the work.” Mr. Bates

Who would have thought that two fierce adversaries would be on the same side? Mr. Bates’ need to fall on his own sword might just kill him some day.

“Shall I tell you how I look at it? Every man or woman who marries into this house, every child born into it has to put their gifts at the families disposal. I’m a hard worker with some knowledge of the land. Matthew knows the law and the nature of business.” – Tom Branson

“You understand the responsibilities we owe to the people round here, those who work for the estate and those who don’t. It seems to me if we could pool all of that, if we each what we can do, then Downton has a real chance.” – Tom Branson

Interesting moment where the former chauffeur/family outsider Tom Branson reveals to the Lord of the Manor what he should be seeing himself. A turning point for Lord Grantham and the estate.

“I’m afraid that I find the idea of a married man flirting with me wholly repugnant. So you see…I must hand in my resignation at once.” – Lady Edith

Oh dear a big blow to #TeamEdith. Another mad wife in the attic? Why must the rug be constantly pulled out from her happiness? 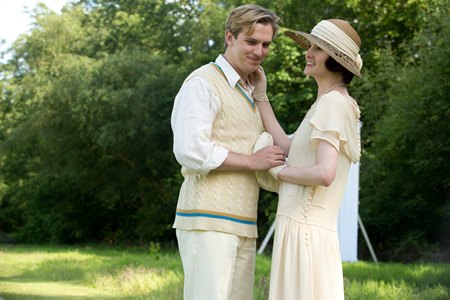 “So we will be building our new kingdom while we make our little prince.” – Lady Mary

Malfeasance, shenanigans, whippersnappers and harlots ran a muck at Downton last night as we experienced one of the sharpest written episodes, whose dialogue had our ears are burning with delight. Our only complaint was that it was too long. We much prefer the one hour length that we have been feed for the past four weeks. There is just too much to absorb in two hours. There. We never thought there could be too much Downton Abbey, but there it is.

Intervene was the key word of last night’s episode as help from unexpected sources arrived to save some, and condemn others. Mary and Matthew have (thankfully) ended their bickering over money and joined sides in Matthew’s plan to modernize Downton. He is very definite about her being on his team now and she did not object as she has in the past. Lady Violet, Dowager Countess Grantham, was in fine form and as Machiavellian as ever manipulating the family and staff into convincing Isobel Crawley that Ethel would be much happier living a new town where no one knew of her past. How she orchestrated obtaining a new position for Ethel by using so many different people to remove the source of scandal was disturbingly brilliant. I never thought I would see Mr. Bates teaming up with Thomas to thwart Miss O’Brien, but he did—and was able to accomplish his goal with one fact from Thomas against her, “her ladyship’s soap.” There were many other instances of characters helping those in need or upsetting plans, but I was most moved by family outsider Tom Branson. As the widow of Lady Sybil, and the new estate manager, he has the unique position of not being deeply entrenched in family dynamics so he can say the obvious to Lord Grantham—that it is everyone’s responsibility to bring their talents forward so they can pool their resources for the benefit of the estate. That is a very socialist ideology that even traditionalist Lord Grantham can agree to.

The Oddest Plot Twist Award of the season goes again to poor Lady Edith and her working girl adventures in London. I am encouraged that they are allowing her to “do” something besides her grandmother’s suggestion of watercolors and charity work, but really Mr. Fellowes—you have taken her character around the bend and through the woods several times in the love department—but fixing her up with her editor (a younger looking version of the infamous altar jilter Sir Anthony Strallen) whose wife is insane is just too close to turning her into Jane Eyre in love with her employer whose wife is madwoman living in the attic. Really? Seriously? This is all you could think up for her?

I will end on that note and ask readers what they thought of all the resolutions and one last dangling conflict?