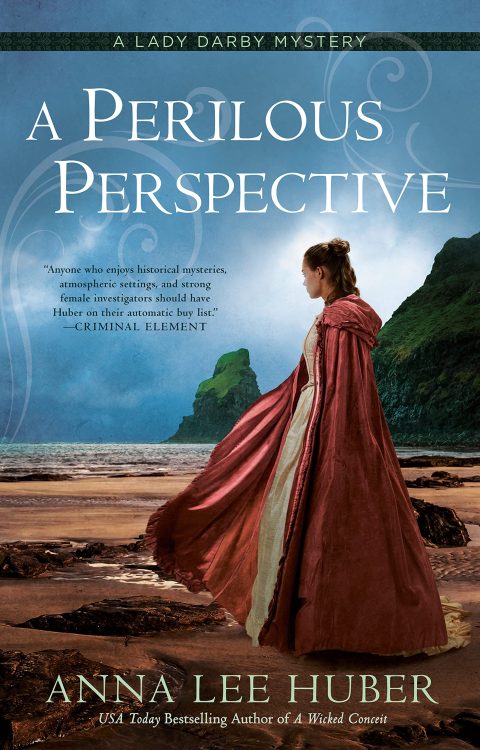 From the first, Anna Lee Huber’s Lady Darby mysteries brought the early Victorian era to life with the atmosphere and gritty backdrop and cunning plot. Add in complex characters led by Lady Darby with a dark past and the layered relationships around her and the series soon became a must-read. A Perilous Perspective is no exception, and I was eager to see Kiera and Gage detecting once again while also learning the ropes as new parents.

“There was nothing quite like the sight of proper, normally reserved ladies and gentlemen flailing and dashing about a moor.” (Loc 81)

Kiera and Gage are visiting the Marquess of Barbreck’s estate in the Highlands along with several other family guests to celebrate her cousin Rye’s wedding to her dear friend Charlotte. Kiera enjoys watching the joie de vivre among her family yet doesn’t miss the undercurrents between Charlotte and Rye’s governess who seems set on undermining her in Rye’s household. Charlotte’s greater fear is that her stuffy father will look down on Rye as her second choice in husband because he’s a mere mister and his disapproval will cloud over the wedding celebrations.

Not long into the visit, Kiera takes Lord Barbreck up on walking through the gallery to view his reputedly fine art collection. She is disturbed when she takes her first look at the most outstanding pieces in the collection. Gage is swift to note her perturbation.

“Kiera,” he said, waiting for me to look up at him.  “You look troubled.” His brow furrowed as his gaze searched mine. “What is it?” I hesitated, wondering if I should keep my suspicions to myself. But then I realized, this was Gage. There was no need to keep such a thing from him…”I think…I’m fairly sure…” I huffed, aggravated with myself for vacillating, and then looked him squarely in the eye to declare with confidence. “I’m nearly certain this painting is a forgery.” (Loc 441)

A Clan Clash and A New Case

As she surmised, breaking the news to Lord Barbreck does not go well, but she is not the only one who is surprised when most of Barbreck’s vitriol is directed at a nearby neighbor from the Campbell clan and the history between the two families is brought to light. Kiera and Gage are engaged to get to the bottom of the matter and Kiera is really tested when one of the secrets revealed is from her own past.

Kiera in the Crosshairs of a Devious Villain

Someone gets nervous when Kiera and Gage get too close to the truth and the murders begin followed by threats to Kiera’s well-being and her very life and that of a person dear to her. Kiera isn’t the same woman who was abused by her first husband and soiled by the scandal the man created, but she feels vulnerable and unsure. Her Aunt Cait gives her a bracing reminder.

“The fact of the matter is, in spite of all you’ve been through, you’ve emerged stronger and wiser. You triumphed in the end. And had you not been through it all, who’s to say whether you would have ever captured Gage’s heart, or given birth to darling Emma…And Who’s to say whether these murder investigations you’ve undertaken would ever have been solved.” (Loc 2705)

In the end, Kiera’s fiery spirit shines through, and she rises to the challenge. She’s not alone and doesn’t have to go it alone, either.

“I noticed one set of eyes staring back at me instead. I dabbed at the wetness in the corner of my eye and smiled at Gage, feeling every ounce of his love directed at me. He looked so dashing in his deep blue frock coat, his golden hair artfully tousled.” (Loc 5648)

A Perilous Perspective got off to a slow start for me. I wasn’t bored, but neither was I thoroughly caught up in the affairs of the story.  Then, a third of the way through, I felt the change as it shifted from simply describing to driving the plot forward with a build-up of tension and the occasional spikes of suspenseful action.  I was immersed in the world, the people, and the mystery.

Kiera is a colorful character. For all the scandal of her past, she is now coming into her own. Gage’s unwavering support along with her family and the confidence she recieves from solving cases beside her partner in crime, Gage. She’s not as defensive or stubbornly insistent on pushing into danger alone and not confiding in her partner.

Incidentally, I thought it was a nice slice of life to show how detecting with a newborn around does alter matters, though I could have done without the many mentions of Kiera feeding Emma.

The mystery started out as investigation of forged paintings, but then added murder and that atmospheric quality Huber puts into her writing. I tagged the culprit right away with no real reason other than their reaction during an interview and an idea about opportunity. Happily, I was right, but I still felt the tension of Kiera and Gage in danger. I do appreciate that the book still held some surprises for me despite knowing who was behind it all. And of course there was that bit of tease there in the last pages to make me want the next book pronto.

In summation, ‘twas a fabulous layering of Scottish Highlander setting, clever and not-so-obvious murder mystery plotting, and sparkling characters and relationship development. I am nudging historical mystery as well as romance fans to put themselves in the way of the Lady Darby mysteries.

We received a review copy of the book from the publisher in exchange for an honest review. Austenprose is an Amazon affiliate. Cover image courtesy of Berkley © 2022; text Sophia Rose © 2022, austenprose.com.

Have you read any of the other novels in the Lady Darby Mystery series, or by Anna Lee Huber?

If you enjoy mysteries with historical detail, intriguing plots, and endearing characters, Austenprose highly recommends them.

6 thoughts on “A Perilous Perspective: A Lady Darby Mystery (Book 10), by Anna Lee Huber — A Review”