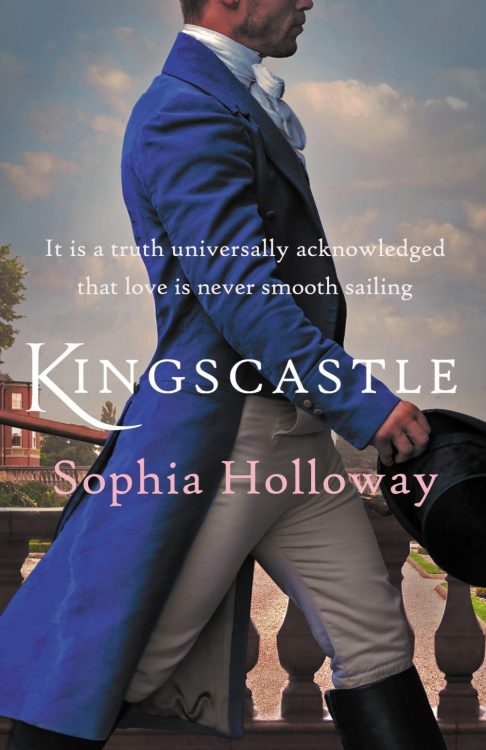 Happy Friday, dear readers. Fall is an exciting time for book lovers with so many new titles being released before the holiday season. It’s always a challenge to narrow down our options. I was struck by the gorgeous cover of Kingscastle, a new Regency romance by Sophia Holloway. Yes, I am shallow and freely admit to being swayed by a beautiful book cover.

Kingscastle was released yesterday by British publisher Allison & Busby. Holloway is the author of two previous historical novels set during the same time: The Devil You Know, & Bless Thine Inheritance. The subtitle of Kingscastle states that it was written in the tradition of Regency romance queen, Georgette Heyer, meanwhile, the book description proclaims that Bridgerton fans will take it to heart. I found this marketing pitch and mixing of styles within the genre interesting and I had to check it out for myself. If you are curious to learn more, please return on December 27, 2021, for our full review.

The publisher has kindly offered an exclusive excerpt for our readers. I hope it gives you a feel for the author’s style and the tone of the novel.

Happy Thanksgiving to one and all!

Captain William Hawksmoor of the Royal Navy never expected to inherit Kingscastle and is none too pleased when he does so. Especially when he learns that he must marry within a year or be forever dealing with trustees.

As the new Marquis of Athelney, the captain takes command of Kingscastle and discovers much to be done to set it in order. He must also contend with his aunt, Lady Willoughby Hawksmoor, who is determined that her daughter will be his wife. When she discovers he is far more interested in Eleanor Burgess, her underpaid and much put-upon companion, Lady Willoughby shows she will stop at nothing to keep them apart.

It was some time after Mr Tideswell’s departure that Captain Hawksmoor stood up and went to gaze into the street below. Here was Portsmouth, a place where he felt as much at home as anywhere upon land. He had gone to sea, under the patronage of his mother’s cousin, at fifteen, which meant half his lifespan had been within the Royal Navy. He had been at sea for most of that time, and had only heard of the deaths of first his father and, last year, his mother, some months after the event. He had been ashore when his elder brother had been killed at Vittoria, but there were no obsequies to attend for a man buried anonymously upon a Spanish battlefield. If he was honest, the service had become his family, and he would miss it badly, now that Hawksmoor family duties were thrust upon him.

He did not see his unexpected elevation to the peerage as different from duty. He could not avoid it, so he would simply do the best he could. He feared idleness, and with so many men ashore, what chance had he of a command? Perhaps turning from the sea, from the ships that would not be there for him, would be a good thing; yet the ‘family’ of the navy had been his for so long that being parted from it was a difficult thing to assimilate. A naval officer was what he ‘was’ to his core; he was as comfortable with it as he was in his faded sea-going uniform. He was not even sure what a landed aristocrat actually ‘did’ in life. As a child he had not questioned what those without ‘employment’ did from day to day. Was a marquis expected to sit in aloof state while minions did everything? If that was the case, well, he would simply be one marquis who did not conform to the norm.

He was lifted from this melancholic mood by the sight of a uniformed gentleman stepping out smartly along the street. The officer looked up, smiled broadly, and touched his hat. Captain Hawksmoor waved him up. A minute or so later, a cheerful voice and familiar tread were heard upon the stair.

The door opened, and a fair-haired man, some five or six years the captain’s junior, came into the room.

‘Good afternoon, sir. I just heard Bradford got the Phoebus, lucky dog. I wonder if he might put in a word for me.’

‘He might. Take a seat, for I have news that may surprise you nearly as much as it surprised me.’

Captain Hawksmoor told Lieutenant Bitton, who had been his first lieutenant aboard his last command, of his change of circumstances. The cheerful lieutenant was suitably amazed.

‘I don’t feel like a lord.’ The captain sounded gloomy again.

‘That will come, my lord, given a few weeks.’

‘Perhaps.’ He sighed. ‘I have no desire for this elevation.’

‘Think of it as a promotion, as if . . .’ Lieutenant Bitton tried to think of an analogy. ‘You had been given a first-rate ship of the line.’

‘It will probably be as unwieldy.’ Captain Hawksmoor did not appear visibly cheered.

The younger man was silent for a moment, and then smiled as a new thought occurred to him.

‘I’d give a month’s pay to see Royston’s face when he hears. Always puffing himself up because his father’s a baronet. What’s a mere baronet in comparison to a marquis!’

Captain Hawksmoor managed a wry smile, but sighed. ‘There is another part to the surprise as well, though.’

Lieutenant Bitton laughed, until he realised that his superior was deadly serious. Then he simply blinked, for there was nothing he could think of to say.

Sophia Holloway describes herself as a ‘wordsmith’ who is only really happy when writing. She read Modern History at Oxford, and her factual book on the Royal Marines in the First World War, From Trench and Turret, was published in 2006. She also writes mediaeval murder mysteries under the pen name, Sarah Hawkswood.

One thought on “A Preview & Exclusive Excerpt of Kingscastle: A Classic Regency Romance in the Tradition of Georgette Heyer, by Sophia Holloway”