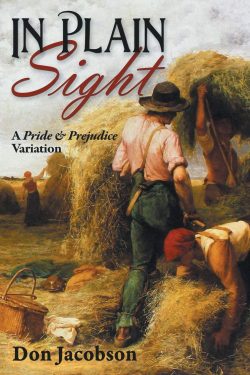 I am happy to welcome Austenesque author Don Jacobson to Austenprose today to celebrate the release of his latest novel, In Plain Sight. Don is a prolific writer publishing seven novels in his Bennet Wardrobe series and additional Jane Austen-inspired variations. He has also contributed to the North and South Anthology, Falling for Mr. Thornton.

In Plain Sight is a Pride and Prejudice variation that might surprise you. When I first read the book description my eyebrows shot up—and then I read that Nicole Clarkston was the editor and that explained a lot. She is also a popular writer who can push the envelope of the norm, so it seemed like an author and editor match made in P&P variation heaven.

Meryton Press has kindly supplied an exclusive excerpt selected by the author to pique your interest. In Plain Sight is now available to purchase. You will find the links to the different retailers at the bottom of this post. Please leave a comment and share what you think of this creative premise.

When Fitzwilliam Darcy’s father slides into an early grave, his son is forced to take on Pemberley’s mantle. Brandy numbs his pain, but Darcy’s worst inclinations run wild. After tragedy rips everything away, he spends years finding his way back: a man redeemed by a woman’s loving understanding.

Elizabeth Bennet is afflicted with a common Regency ailment: observing the world about her but not seeing those beneath her notice. Then a clarifying act shatters the propriety that has denied her heart the transcendent love she craves.

In Plain Sight explores Jane Austen’s eternal love story by flipping social roles on their heads. From their first encounter, Elizabeth Bennet and the convict known as “Smith” must overcome their prejudices and breakthrough their pride. Only then can they share the treasure hidden in plain sight.

Darcy had the lead as he flew between Pemberley’s gateposts. Wickham’s nags were lagging as Darcy’s matched grays, nostrils flared, spun onto the Derby Turnpike and pointed the curricle toward Lambton.

The wind nipped Darcy’s nose and ears, cutting through the alcoholic haze that had wrapped him in its warming arms. He realized how foolhardy it had been to succumb to Wickham’s taunts and accept his wager. After two bottles of brandy, it had seemed a reasonable proposition. For him, twenty-five pounds was barely pocket change, but for Wickham…well, George all but broke a leg racing out to the stables to set the boys to harnessing.

A small corner of Darcy’s mind, a part not involved in managing the ribbons, contemplated why he had acted so rashly. Four months ago…before Papa…he never would have behaved like this. His barriers were gone. In shyness, Darcy had fallen back on the familiar: George Wickham.

Darcy had rationalized compromising his integrity—my good regard, once lost, is lost forever—by arguing that, as long as Wickham was imbibing brandy in Pemberley’s parlor, he could not be victimizing Lambton. Darcy had also applied Wickham’s favorite lubricant, guineas, to purchase a congenial drinking partner.

At no point in the past three months had Darcy altered his behavior, not even when the earl and countess appeared at Pemberley’s door demanding to take Georgiana to “visit her cousins.” He realized that he could not manage a girl-child, not in his state. Thus, her removal struck him as wise, doing that which he could not and admitting that the family was broken by his father’s death. He had found a way, though, to pull himself together, and to bid his sister a happy farewell. Ten-year-old Georgie, filled with innocent excitement at a sojourn in Matlock, was none the wiser. Once the door closed, Darcy crawled deeper into the green bottle.

There was a part of him that wished to destroy a world that had taken his father before his time and, failing that, himself.

Now, in the dark of a Derbyshire night, Darcy was in the middle of his most foolhardy effort to throw off responsibility’s heavy yoke.

Wickham’s curricle responded agilely to its master’s experienced driving. Since leaving Cambridge, Wickham had been lining his pockets with the ready so easily gambled away by the ton’s dissolute sons. His edge over Darcy sprouted from dozens of races just like this.

As the two curricles approached the bottleneck where Lambton’s High Street looped off the turnpike, Wickham began to draw even. Darcy over-steered on the hard-left turn, which allowed George to slide by on the right and gain a full length. However, the master of Pemberley was not to be outdone by his old playmate. Once the road straightened between the shops and stores, Darcy whipped the grays into a final burst of speed.

He pulled up to Wickham. At that moment, George looked over and flashed a toothy grin before throwing his head back and laughing at Darcy.

That was a fatal error.

As he turned his attention once again to the dirt fairway before him, a look of horror reshaped Wickham’s features.

There in the byway was the solitary figure of a man struggling to get out of the way of the speeding vehicles.

Tomkins did not have a chance.

Neither did Darcy nor Wickham.

Wickham instinctively hauled his team hard left. However, the die had been cast. The most Wickham could do was spare Tomkins death beneath iron-shod hooves. However, the metal rim of the right wheel was sure to catch the one-legged man who lay sprawled in the dirt, clawing hand-over-hand, trying to escape.

He screamed as the wheel slashed across his living leg.

In a flash—and before Darcy could react—Wickham’s swerving carriage veered into his lane.

Wheels clashed and locked together. Spokes splintered. Nearly two tons of equine flesh slammed into one another. Neither driver could protect himself from the impact or the oaken javelins that broke free as the curricles disintegrated.

Darcy climbed out of the darkness into a world through which the faces of a milling crowd flickered. At some level, he became aware of an angry murmuring, but the dampness that seeped into his eyes prevented any deeper understanding. What remained were the shrieks of sheer agony that would haunt him to the end of his days.

All he knew was that the vacant eyes staring back at him from a face that rested upon bleeding torso bent at an impossible angle had lately belonged to George Wickham. What Darcy did not apprehend at this moment was that Wickham had, through the expedient of breaking his neck, escaped the fate awaiting Darcy.

Don Jacobson is an Emmy nominated writer in news and features for advertising, television, and radio. He has published seven novels in The Bennet Wardrobe Series along with Of Fortune’s Reversal” (2016), The Maid and The Footman (2016), Lessers and Betters (2018), and contributed a short story in the anthology, Falling for Mr. Thornton: Tales of North and South (2019).

Jacobson holds an advanced degree in History with a specialty in American Foreign Relations. As a college instructor, Don teaches United States History, World History, the History of Western Civilization, and Research Writing. He is a member of the Austen Authors Collective and JASNA. He lives in Las Vegas, NV with his wife, Pam.

16 thoughts on “A Preview & Exclusive Excerpt of In Plain Sight: A Pride & Prejudice Variation, by Don Jacobson”