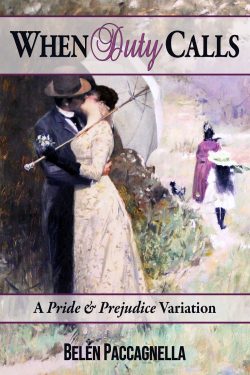 Being a book geek, I am not ashamed to say that I get chills when I see a beautiful book cover. I am drawn to them like a moth to the flame. The mesmerizing design of When Duty Calls is by Janet Taylor. It is her best to date. Bar none. Forgive this indulgence. I just had to gush about it for a moment!

Okay, now on to the book that we are previewing here today by Belén Paccagnella. When Duty Calls was written close to twenty years ago and posted online as Jane Austen fanfiction. It has been resurrected and published as a book by Meryton Press. You don’t see that happen very often. Maybe, like never!

I am thinking back to 2000 and the state of Austen fanfiction at the time. Linda Berdoll’s The Bar Sinister was self-published in 1999 (and later reissued as Mr. Darcy Takes a Wife in 2004), and Pamela Aidan was posting her Fitzwilliam Darcy Gentleman trilogy on the Republic of Pemberley fanfic board. It takes me back to the early days of Jane Austen fanfiction. It says a lot for the story in When Duty Calls that it is still viable after all these years and I am intrigued to read it. How about you?

The author Belén Paccagnella has kindly offered an exclusive excerpt and her publisher is giving away eight eBook copies through Rafflecopter of When Duty Calls. The excerpt follows this introduction and the details of the giveaways are at the bottom of the post. Enjoy!

The Netherfield ball brings about many changes for the population of Meryton, and more so for the female residents of Longbourn. Mr. Bingley’s departure leaves the eldest, Jane Bennet, heartbroken whilst Mr. Collins’s proposal induces Miss Elizabeth to make a hasty escape. During her flight, she happens upon Mr. Darcy, a gentleman she despises. A moment of solitude in the woods leads to rather improper behavior, and the couple departs with the promise they will tell no one about their minor indiscretion. When their secret is finally uncovered, marriage becomes the only solution to saving Elizabeth from social disgrace. Her other grudges against Mr. Darcy are amplified by resentment and the prospect of spending her life with a man she can never respect. Nonetheless, the marriage takes place, forcing the young couple to deal with their pride and prejudices as husband and wife.

Originally posted online almost twenty years ago, this Regency tale of redemption narrates the struggles of two people, their differences, and their rocky start. But will they succeed in overcoming lies, misunderstandings, and their own errors to finally find love?

Thank you, Lauren Ann, for hosting a stop on the When Duty Calls’ blog tour!

The date of Elizabeth’s wedding to Mr. Darcy was fast approaching, and with so little time ahead, the ladies of Longbourn, with Mrs. Bennet at the lead, were devoted to the task of reading everything for the grand event. Elizabeth was the least enthusiastic of them and bore her misery with stoicism, barely expressing her opinion when she was consulted and grudgingly participating in the preparations.

“Lizzy! The post has arrived!” Mrs. Bennet came chanting to the sitting room where Elizabeth sat with her sisters, holding some letters and a large box. “There is a letter for you, and also this big package! It must be the lace I requested for your trousseau. I have been expecting this the whole week!”

The box was deposited on the table, and the girls —except the bride-to-be—gathered around to see what it contained. The wrap was broken, and fabrics and laces were pulled out and spread over the table.

Everyone was charmed, everyone except Elizabeth. The mere thought of her wedding made her sick to the stomach.

“Do not distress yourself, Lizzy,” Jane approached her sister and gave her a letter addressed to her. “I am certain you shall be very happy with your future husband. He is coming tomorrow, is he not? Perhaps you can talk to him and clear this misunderstanding once and for all.”

“Yes,  he is.” Elizabeth attempted a smile. “Excuse me, I shall read this in my room.”

Elizabeth stared at the piece of paper that rested on her lap and exhaled a long and tremulous sigh. Her plans to talk to Mr. Darcy about his deals with Mr. Wickham would have to be postponed until the wedding.

What shall I do now? She thought with despair. I cannot write to him about this subject, and I certainly cannot discuss it on our wedding night!

She read it one more time. His motives for not coming to Longbourn were reasonable enough, yet she hated him for delaying this conversation.

I should be by your side now, and that is my greatest wish at this moment, but an unfortunate health problem has prevented me from riding to Meryton this week. For the past several days, I have suffered from a cold that has forced me into bed and thwarted my desire to travel. I would have ridden thither regardless, but prudence dictates that I should not risk my condition and let a simple head cold turn into something worse, nor spread it to those who will soon be family to me. I do not wish to attend the ceremony in poor health.

If no further unforeseen circumstances arise, my arrival in Meryton will be on the evening of January 18, two days prior to the wedding. My cousin Colonel Fitzwilliam will accompany me. We are to stay at the inn in Meryton as we do not wish to impose upon your family’s hospitality so close to the ceremony.

With this letter I enclose a small proof of my regard for you. I had planned to give it to you when I arrived, but the motives I expressed before have prevented it. I sincerely hope it is to your liking.

Please accept this little piece of my heart.
FD

Elizabeth took the heart-shaped gold locket that came with the letter. Please accept this little piece of my heart. He could not possibly mean it—not in the way she wished his words had been expressed. In moments such as these, she wished Mr. Darcy had not insulted her at the assembly, had not been responsible for Mr. Wickham’s misfortunes, or kissed her in the woods. Perhaps, had things been different earlier in their acquaintance, she would be marrying for love and not duty, and this pendant would have been a gift from a man in love instead of a meaningless token from an absent betrothed she had not yet learned to respect.

Her fingers traced the delicate filigree, and she allowed herself, if even for only an instant, to forget his wrongs and find her husband-to-be less repulsive. In this benign mood, Elizabeth turned the pendant over and saw the inscription engraved in the back.

The words took her by surprise. She had never expected such an impassioned declaration from Fitzwilliam Darcy. Their engagement had been so short—their meetings, seldom and so withdrawn that she doubted the sincerity of his words. One part of her wanted to believe it; the other, her rational side, thought him incapable of proper feelings.

“To My Love.” She read it again. How she wished it were true!

Born in Buenos Aires, Argentina, Belén Paccagnella discovered the world of Jane Austen fan fiction after watching the 1995 BBC miniseries of Pride and Prejudice. In her teens, she lived in Brazil when her family moved to the city of Curitiba due to her father’s work. She moved back to Buenos Aires a few years later, where she studied agronomy but finally pursued a different career and started working in the development and administration of shopping centers.

In 2001, she began writing both Regency and modern stories, adapting the Pride and Prejudice storyline to different backdrops, merging drama, humor, and adventure while creating characters with unique traits. Almost two decades later, she published Obstacles, a modern variation released in 2018 by Meryton Press.

Belén still lives in the suburbs of Buenos Aires where she shares her home with her pets while spending her time working, reading, and writing.

Austenprose is pleased to be part of the When Duty Calls Blog Tour in celebration of its release. Please follow along to discover additional reviews, exclusive excerpts, guest blogs, and interviews.

26 thoughts on “A Preview & Exclusive Excerpt of When Duty Calls: A Pride & Prejudice Variation, by Belén Paccagnella”