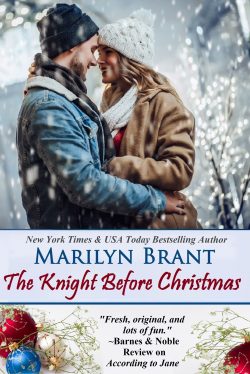 Hey-ho-ho Jane Austen fans. How are your holiday festivities and shopping shaping up? My neighborhood has decked their houses with lights and a few Santa’s on the rooves. One even sports a giant green Grinch. Ouch! They could use a good dose of holiday cheer, like watching one of the billion Hallmark Holiday movies airing on TV right now or reading The Knight Before Christmas, Marilyn Brant’s new holiday-themed contemporary romance.

We have reviewed several of Marilyn’s previous novels here in the past with glowing results. Her Jane Austen-inspired According to Jane, and Pride, Prejudice and the Perfect Match are worthy of adding to your shelves.

However, today we are introducing you to her latest release, The Knight Before Christmas. Inspired by Jane Austen’s Emma, she takes the essence of Austen’s nonsensical heroine Miss Emma Woodhouse and her older, wiser neighbor George Knightley and gives them a modern spin. Here is the book description from the publisher and an exclusive excerpt from the author herself for your enjoyment.

When successful building contractor Austin Knightley returns to his hometown of Crystal Corners, Minnesota, after a decade away, he vows to avoid pampered and popular types like his old high-school crush Emma Westwood—the town’s biggest queen bee and self-appointed matchmaker—only to get swept into a community Christmas project she’s now organizing.

With nods to Jane Austen’s classic novel Emma, this modern heroine may be a little “clueless” in the Midwest, but she’s got gifts to share and plenty to learn from the boy next door, who’s all grown up and handsomer than ever. Even when a snowstorm threatens to derail her plans, she’s determined to figure out how to set things right and save The Knight Before Christmas. This sweet and heartwarming holiday romance is a story that can be enjoyed by readers of all ages.

It was the Yuletide of course, not Halloween, but maybe the date explained why she was having her own personal nightmare before Christmas.

She’d been trying for hours to reach a woodworker, a manager, a receptionist, anybody at Don’s Fine Furnishings—but no one was answering. The voice message was a standard “we’re not available now but will get back to you soon” kind of thing, but they still hadn’t returned her calls from yesterday, let alone her urgent inquiries today.

Her emails had also gone unanswered, which surprised her even more since everyone at the company had replied so promptly to her messages in the past.

Emma wasn’t inclined toward being superstitious, but maybe the bizarre goings-on today were on account of the inauspicious date. All she needed was to cross paths with a black cat or walk under a ladder to cement her bad luck.

Of course, it was too cold outside for the average housecat to be running around, and no one with sense would set up a ladder on an icy sidewalk. So, Emma was fairly confident she wouldn’t come upon any additionally unlucky entities during her morning errands in town.

Until she ran into Austin Knightley.

“Oooph,” he said as she slid into him with a thud at the corner of Main Street and Second Avenue.

“Oh! I’m so sorry!” she exclaimed as he steadied her and then quickly stepped away from her body as if she had a virus. “I-I wasn’t looking. My apologies.”

Despite the cold, she could feel her cheeks heating up. How embarrassing. She’d been looking at Santa standing out in front of Nick’s Toy Shoppe and returning his friendly wave when she’d rounded the corner. Of course, of all the people in Crystal Corners she could possibly run into, it just had to be Austin.

“No worries,” he said with a small smile that cracked the otherwise impervious mask of his face. “This jacket is thick enough to protect me from a boulder crashing into me. You didn’t leave a dent.”

Emma swallowed, unable to keep from noticing how well he wore that jacket. Dark gray suited him. “Um, good,” she murmured. Then she paused, waiting for him to comment again. He was studying her strangely, and she couldn’t help but feel he found her wanting somehow.

Eventually, he kind of shook his head, as if dismissing her, and simply said, “Well, have a nice day, Emma,” before he stepped past her and continued on his journey.

She watched him leave and caught sight of the same store Santa waving at Austin—an extra gleam, perhaps, in the older gentleman’s bright eyes.

Austin returned the wave to the man in red, but he didn’t look back at her.

She let out a breath she hadn’t realized she’d been holding and tried to think through the action plan she had for the rest of the morning.

It was only eleven fifteen but, seriously, could this day get any worse?

Austin was pretty sure bad things came in threes…and that had to be triply true on Friday the thirteenth.

First, his dad had taken a spill at physical therapy this morning. He was fine, overall, but a little bruised and in need of an ice pack.

Then, the candidate Austin had been most interested in hiring to manage the Twin Cities branch of his company withdrew his application because he’d accepted a position elsewhere. That left him having to go back to the drawing board and rethink the merits of the remaining applicants.

And, finally, just when he thought the day couldn’t go any further downhill, he’d run smack into Emma Westwood.

A woman who looked absolutely ridiculous on this frigid December morning.

What kind of birdbrain wore a lightweight designer cloak-like thing in the midst of a Minnesotan winter? Or a scarf that thin? (There were weird patterns on it, and he could’ve sworn it had sparkles.) Or “boots,” for want of a better word, with heels that spiked and lacked any real tread? A strong gust of wind could have toppled her over or sent her flying across the road.

But, he had to confess, she made a pretty picture surrounded by the snow-covered evergreen bushes that lined the sidewalk and all of those downtown holiday decorations.

He shook his head. Don’t go there, man, he told himself. It’s not worth it.

Marilyn Brant is a New York Times & USA Today bestselling author of over 20 books in the genres of contemporary women’s fiction, romantic comedy, and mystery. Her debut novel about Jane Austen won the Romance Writers of America’s prestigious Golden Heart Award® (2007), and she was named Author of the Year (2013) by the Illinois Association of Teachers of English. She’s a travel addict, a music junkie, and an insatiable book collector, who loves to discuss story structure and periodically contributes novel beat sheets to the popular screenwriting website, SaveTheCat.com. Marilyn’s family believes she’s lost unquantifiable hours to the allure of “Tasty” videos on Facebook, but she refuses to substantiate this claim. For more about her writing, visit Marilyn’s website: http://www.marilynbrant.com

Just a friendly head’s up. Don’t confuse this delightful new holiday novel with the Netflix holiday movie that premiered this season. They may share the same title, but they were written by two totally different authors. The only thing they have in common is that they are both set during Christmas and there is snow.

I look forward to reading The Knight Before Christmas this holiday season and send a big thank you to Marilyn for generously sharing an excerpt today with our readers. Doesn’t it look great?

8 thoughts on “A Preview & Exclusive Excerpt of The Knight Before Christmas, by Marilyn Brant”