Charles Dickens’ classic novel Great Expectations has been adapted no less than fourteen times for the screen. Like Charlotte Bronte’s Jane Eyre, and Jane Austen’s Pride and Prejudice, every ten years or so it gets trotted out for a new interpretation; and, for good reason. The tale is a masterpiece of storytelling – compelling to read, and fabulous to experience filmed.

Since the 1970’s I have watched all of the new adaptations as they aired on television and re-watched the 1946 David Lean movie several times. Some were memorable, others, not so much. In the scheme of things, Masterpiece Classic’s new mini-series of Great Expectations that concluded last night on PBS was definitely a keeper. 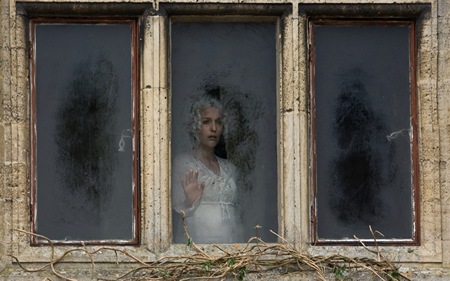 Of all of Dickens’ cannon of incredible stories, Great Expectations is one of my favorites. Filled with amazing characterizations, we meet the incredibly good and the incredibly bad in human nature: innocent orphans, devious murders, slimy blackguards, unscrupulous lawyers, cold-hearted ingénues, and Miss Havisham. Yes. Since the book’s publication in the 1860’s, Miss Havisham has earned her own classification. If Mr. Darcy, Mr. Rochester, and Heathcliff are literary romantic icons, then Miss Havisham is their polar opposite. To be trite, there is no fury like a woman scorned. Jilted at the altar, she is obsessive, manipulative and revengeful, sending shivers into the souls of rakes, libertines and bounders – and making young maidens wiser beyond their years. She is one of my favorite fictional characters and the benchmark for every new adaptation of Great Expectations. If Miss Havisham is spot-on twisted, then you know that the rest will follow. Happily, actress Gillian Anderson gave an unnerving performance as the eccentric, wacked-out, misandrist that was nails on chalkboard disturbing. Even though I knew the outcome of the story, I was compelled to watch as she weaves her revenge until her tragic end comes to pass.

In my mind, screenwriter Sarah Phelps, director Brian Kirk and art director Katherine Law gave Miss H. an other-worldly quality that I had not experienced before in other productions. Dressed in her famous tattered white wedding dress, we truly believe that her world froze the moment she read her fiancé’s letter jilting her on her wedding day. Not only is she dead emotionally, she looks like a ghost haunting her crumbling manor house with the clocks stopped at 11:00, years of dust on every surface, cobwebs across every vertical object and the wedding banquet food rotting in the dining room. Eeek! The first time she literally floated down the massive staircase, I shuddered in horror. This was creepy. Anderson’s glazed over eyes, delayed reactions and hoarse voice only added to her ghostly apparition.  It was not quite Dickens’ original intention, but it worked for me. 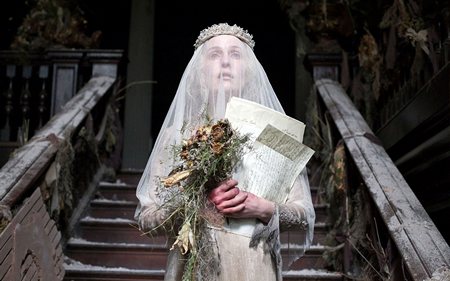 Everything about this new production was eclipsed by the great white lady after this point. It seemed quite fitting. A tribute to the grand dame of jilted lovers.