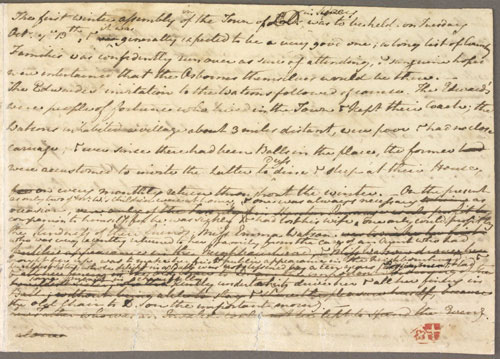 The Watsons is a fragment of a novel that Austen began around 1803 when she was residing with her parents and sister Cassandra in Bath. Written during an unhappy time in her life, she did not complete it, most likely due to her father’s death in January 1805. It contains five chapters and is about 17,500 words in length. Because it is a rough draft neatly written in Jane Austen’s own hand, we see her edits and corrections in progress, offering us a unique window into the writers mind.

When Austen died in 1817, her sister Cassandra inherited the untitled manuscript which passed upon her death in 1844 to her niece Caroline Mary Craven Austen (1805 – 1880), the younger daughter of Jane Austen’s eldest brother James. Upon Caroline’s death, the manuscript was inherited by her nephew William Austen-Leigh who offered the first six leaves (12 pages) for a charity sale in 1915 during World War I to benefit the Red Cross. The manuscript was auctioned at Christies in London and sold for £65 to Lady Wernher. This portion of the manuscript was later sold in 1925 to J. P. Morgan, Jr. and now resides in The Morgan Library & Museum in New York City.

The remaining pages would pass to Lionel Arthur Austen-Leigh and his three sisters who were the nephew and nieces of William Austen-Leigh and where displayed at the British Museum for many years. It was sold in 1978 to the British Rail Pension Fund, who in 1988 presented it for auction at Sotheby’s in London attaining £90,000 from Sir Peter Michael. It is now on deposit at Queen Mary, University of London, where Sir Peter was once a student. Shockingly, in 2005 a portion of the manuscript was lost by the University! A full investigation revealed no clues to their disappearance. The missing pages have yet to be found.

The Watsons is an important manuscript in Austen scholarship. By 1803, she had written her juvenilia and three novels, Elinor and Marianne, First Impressions and Susan. These three novels would later be reworked and published as Sense and Sensibility in 1811, Pride and Prejudice in 1813 and Northanger Abbey in 1817. Austen scholar Claudia L. Johnson states in her 2003 introduction in the Oxford World’s Classics edition of Northanger Abbey, Lady Susan, The Watsons and Sandition that:

“The Watsons thus stands as an unfinished bridge between the animation of Austen’s youthful work and the greater sobriety of her later phase.”

The Watsons touches upon one of Austen’s familiar themes: unmarried ladies challenged by their families and financial deficiencies. The heroine Emma Watson has been raised by a wealthy aunt with the advantages of education and refinement. Her two elder brothers and three sisters remained with their widowed father, a sickly and impecunious clergyman barely able to discharge his parish duties and definitely not in control of his three quarrelsome unmarried daughters who reside with him in the Surrey village of Stanton. When Emma’s aunt remarries, she is sent back home to find mercenary husband hunting the order of the day for her two sisters Penelope and Margaret who think nothing of stealing others beaus. Her solace is with her eldest sister Elizabeth who attempts to keep the family a float with frugality and cheer. Residing in the neighborhood is a titled family whose loutish son Lord Osborn is attracted to Emma while her sister chases after his social-climbing friend Tom Musgrave.

As an Austen enthusiast, we can only hope this portion of The Watsons is purchased by a library, museum or similar institution and displayed to the public. Of course its ideal home would be to re-join the first 12 pages at The Morgan Library in New York.