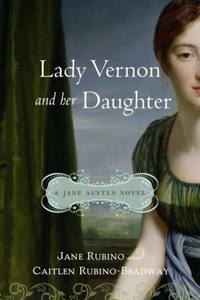 I love this quote by Austen scholar Margaret Drabble. It is the opening line of her introduction to the 1974 edition the Penguin Classics Lady Susan, The Watson’s and Sandition, long before the Austen sequel industry would become its own book genre. Little did she know that other writers would take the next step to satisfy Austen admirers.  Thirty-five years later, we have literally hundreds of prequels, sequels, spinoffs and continuations to choose from. Most are inspired by Austen’s most popular novel, Pride and Prejudice. Proportionally – too many. So when I read the announcement last March of a new novel Lady Vernon and her Daughter based on Jane Austen’s novella Lady Susan, my heart leapt. A fresh concept! I knew of only one other sequel based on Lady Susan written by Phyllis Ann Karr in 1980, and long out of print. It was past time for Lady Susan to have her turn again. The authors, appropriately a mother-daughter team, Jane Rubino and Caitlen Rubino-Bradway have graciously offered this guest blog during ‘A Soirée with Lady Susan’ to share their insights about Lady Susan and their inspiration to write a new novel based on Jane Austen’s novella.

Lady Susan is the title character of an early epistolary work written by Jane Austen in the early- to mid-1790s. Lady Susan Vernon is a beautiful young widow, a “dangerous creature” and “the most accomplished coquette in England.” In a series of letters, principally between Lady Susan and her friend, Alicia Johnson, and Lady Susan’s sister-in-law Catherine Vernon and Catherine’s mother, Lady deCourcy, we extract a portrait of a woman of pleasure, flirting with three admirers while disarming her wary in-laws and arranging a loveless marriage for her daughter. It’s a work that’s difficult to characterize; it is too sophisticated to be considered juvenilia, and it isn’t a fragment; yet, while it’s a complete work, it isn’t a fully realized novel.

It is not unlikely that some inspiration for Lady Susan came from the sensational French novel Les Liaisons Dangereuses, which appeared in England in the decade before Lady Susan was written. The Marquise de Merteuil’s, “…it seems to me scarcely possible for a woman who is offered such a golden chance – with so little risk – to reduce a male to despair could resist indulging in such a treat” is not very different in sentiment from Lady Susan’s, “There is an exquisite pleasure in subduing an insolent spirit, in making a person pre-determined to dislike acknowledge one’s superiority.” The Marquise’s contempt for the youthful affection of Cecile and Danceny resembles Lady Susan’s disdain for her daughter’s admiration of Reginald deCourcy, and Lady Susan’s scheme to force Frederica to marry Sir James is as coldly calculating as the Marquise’s plot to have Valmont seduce Cecile.

Jane Rubino had written a contemporary mystery series, and happened to be reading Lady Susan at the time she was thinking of writing a second series. The “Lady Susan mysteries” were quickly abandoned, and we began discussing turning the work into a historical novel with elements of mystery; that plan gave way to reconstructing the work – converting an epistolary novel to a third person narrative, as Austen revised Elinor and Marianne into Sense and Sensibility. In fact, we discovered a number of similarities between Lady Susan and Sense and Sensibility.  There are the dual heroines, dual romances, and a mother and daughter(s) displaced when the family estate passes to an heir.  We decided to approach the book as a “what if Jane Austen had revised Lady Susan, as she had done with Elinor and Marianne”?

In order to conform to Austen’s canon, we resolved to use Austen’s novels as our primary reference.  Austen’s heroines are flawed, but not malicious, so Lady Susan became a sympathetic character. Her conduct is not radically altered, but is motivated by economy, rather than “exquisite pleasure” – with that in mind Lady Susan became Lady Vernon.  While there are supporting players in Austen’s canon who are widows of independent means – Lady Catherine deBourgh, Mrs. Jennings, Lady Russell – Austen’s widows are more likely to be anywhere from women of modest means to downright indigent – Mrs. Dashwood, Mrs. Bates, Mrs. Smith, Mrs. Norris, Mrs. Thorpe. Austen’s heroines, moreover, are not women of high rank, and to have Susan Vernon the daughter of an earl (as suggested by that “Lady Susan”, but never stated in the work) would have taken her out of that tier from which Austen’s heroines are drawn.

The format, of course, had to go – the novel-in-letters is unwieldy – but we converted as much of the letters as we could into dialogue or exposition.  The use of letters was retained, however, as Austen frequently used letters to advance the plot, or reveal critical information. There are the letters of Mr. Darcy and Mrs. Gardiner in Pride and Prejudice, Isabella Thorpe’s self-centered correspondence to Catherine Moreland in Northanger Abbey, and, of course, Frederick Wentworth’s proposal in Persuasion.

Finally, we decided to dedicate Lady Vernon and Her Daughter to one of Caitlen’s favorite professors, Mary Ann Macartney.  While Jane has always been an Austen devotee, Caitlen’s love of Austen really developed in college, in an intensive Austen seminar.  Ten Austen fans in a small room every other day will fuel your fanaticism no matter what, but it was Dr. Macartney’s passion and attention to detail that really inspired Caitlen.   Our dedication is a small way of saying thanks for hers.

Thank you Jane and Caitlen for joining us today. Lady Vernon and her Daughter is one of my most highly anticipated Austen inspired novels of the year. It is due out on the 6th of October and available for pre-order today.

Leave a comment by September 13th to qualify for the free drawing on September 14th for one copy of Lady Vernon and her Daughter, by Jane Rubino and Caitlen Rubino-Bradway (US residents only)

20 thoughts on “A Soirée with Lady Susan: Guest Blog with Jane Rubino & Caitlen Rubino-Bradway authors of Lady Vernon and her Daughter”