The advenure continues as intern Virginia Claire Tharrington reports in on her experience at The Jane Austen Centre in Bath, England.

Secondary characters in Austen and in life

This week has been a slightly crazy one for me again because we have had our second round of papers due for my Jane Austen class. I have also been working on my dissertation which will focus on Jane Austen adaptations and the agenda’s that I perceive that the movies take verse what I think Jane Austen’s agenda was in writing the novels. It should be interesting and I will keep everyone posted on its developments. I think I will just be ranting in parts of it ; ) but we will see.  My paper topic for this week was on a Virginia Woolf quote saying “She wishes neither to reform nor to annihilate; she is silent, and that is terrific indeed.  One after another she creates her fools, her prigs, her worldlings…She encircles them with the lash of a whip-like phrase, which, as it runs round them, cuts out their silhouettes forever.” I took this topic and focused on secondary characters in Mansfield Park, particularly Maria and Rushworth because I enjoy them so much. She draws them both so deliberately and perfectly. Rushworth particular has some of the best line of the narrator’s scorn and yet his bride does not fair much better. Maria’s reasons for matrimony are scorned and her actions with Crawford are condoned yet she is such a wonderful character still.  Austen does shape secondary character so beautifully. With Mansfield Park it seems that its secondary characters are the most memorable at times. (Don’t get me wrong here I do like Fanny and Edmund yet I think other characters have better lines and commentaries). 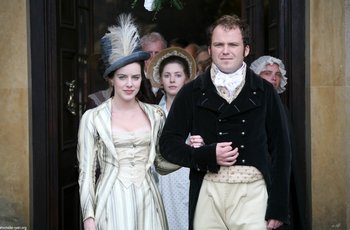 I was talking with some of the other guides at the Jane Austen Centre about these secondary characters and they too pointed out their love/disgust at people like Rushworth. One guide pointed out that the Bertrams and Rushworth’s have every advantage over Fanny in education, status and rank and yet it is Fanny who ends up the heroine. Mary Crawford I think particularly can fit into the mold of a faulty education. Many of the phrases Mary Crawford is known for are things that I feel like could come out of Elizabeth’s Bennet’s mouth (though with more propriety and obvious exceptions). Perhaps Austen is commenting on a London education and how little it could do for a girl. Perhaps Mary would have been more like Elizabeth had she been raised in the country rather than in town. But we shall never know. All I want to point out is that Mary Crawford is a lot like Elizabeth except with town thrown in.  It is interesting to think about at least.

As for more about secondary characters in Jane Austen, what about secondary characters in life? I sometimes wish that I had the delineating wit that Jane Austen had to cut so far and so fast into people. Everyone knows people like Rushworth or Maria in life… or at least people who share some of the qualities and I think it is one of the beautiful things about Austen because I seem to enjoy these people more after reading her. I think Austen’s secondary characters show, me at least, that there are reasons and people to laugh at every day. We just have to find them. Jane was severe to be sure yet sometimes severity doesn’t hurt. I am not going to publish a novel of the fools I encounter; I am just trying to make it through college sane and in one piece. I think Austen can help show us how to do this by finding those little quarks that can make us laugh and reminding us not to take ourselves too seriously. So though I do not have any Rushworth’s or Maria’s in my life I think they can remind us to look around, see the world, and laugh!

Cheerio till next week! My brother is coming to visit so the post will be about brothers and sister…. I think my brother more of the William Price type, though his correspondence is not as constant as William’s!

Read the archives of An Austen Intern Reports In

NEWS FLASH! Virginia is featured in the November issue of The Jane Austen Centre newsletter. You can subscribe to receive your very own newsletter e-mailed monthly.

1 thought on “An Austen Intern Reports in From The Jane Austen Centre: Week 12”