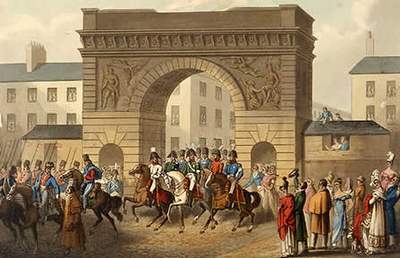 Allied troops entering Paris after the defeat of Napoleon Bonaparte

“the little bit (two inches wide) of ivory on which I work with so fine a brush, as produces so little effect after so much labour” Letter to Edward Austen, 16 December 1816, The Letters of Jane Austen

Today marks the anniversary of the Battle of Waterloo, which is generally credited as Napoleon Bonaparte’s final defeat; – a significant event in European history that deeply affected the lives of every Englishman and the World. Bonaparte would soon surrender his troops and abdicate the throne, ending a seventeen year conflict between Britain and France, and other European nations. You can read a complete account of the battle here.

Jane Austen had very little to say about the Battle of Waterloo or any aspect of the Napoleonic War, and that really irritated some of her critics. For some reason, the fact that she did not discuss politics or war in her novels makes her somehow negligent and narrow as an authoress. Her surviving personal correspondence is a bit better, with dribs and drabs of comment to her sister Cassandra about their two brothers Frank and Charles who served as sailors in his Majesties Navy, and were deep into the thick of the fighting.

She lived almost her entire life in the shadow of the Napoleon’s tyranny. To criticize her because she chose not to include mention of it or other external political events in her novels is a misunderstanding of her intensions. Author David Nokes in his biography Jane Austen: A Life, touches upon this point and offers a logical explanation.

For most of Jane Austen’s life, England was a country at war. Yet, famously, her novels rarely hint at this fact. Her characters may include several handsome officers, but they appear less as fighting men than as gentlemen in uniform whose principal maneuvers concern the capture of female hearts, not the storming of French garrisons. Absence of war is a condition of Jane Austen’s fiction much prized by modern readers, who find great charm in her apparent depiction of a tranquil realm of domestic harmony and rural peace. The temptation to view Jane Austen’s chosen fictional milieu (‘3 or 4 families in a country village’) as a accurate social microcosm of Regency England has proved irresistibly beguiling to readers wishing to discover, in the pages of her novels, a lost England of innocent pride and family comic prejudices.

I agree with Nokes. Jane Austen did limit her scope and that is one of her greatest gifts to readers and possibly the strongest argument why she is so successful and valued today. She wrote confidently about what she knew; the importance of social mobility, the travails of courtship, and the nature of the human heart. Her admitted stricture of confining herself to “the little bit (two inches wide) of ivory on which I work with so fine a brush, as produces so little effect after so much labour” is proof that she knew exactly that her emphasis was precise and narrow, and it was her choice.

Even though no letters or personal accounts survive to inform us of Jane Austen’s reaction to the news of Napoleon’s defeat, it would have been cause for private celebration for her and many English households. Over 22,000 Englishmen lost their lives on the battlefield of Waterloo which touched so many families throughout the nation. My personal connection to the battle of Waterloo lies with my three times great grandfather Edward Shewell who served in His Royal Majesties 2nd Battalion of the 35th Royal Sussex Regiment of Foot during the Napoleonic War. Born in 1787 at Ickelford, Hertfordshire into devout Quaker family, his call to duty to his King was stronger than to his pacifist religious convictions, and he enlisted as an Ensign in the army in 1812. On June 18th 1815, twenty-eight year old Lieutenant Shewell is listed in the rolls of the 4th Division of the 6th British Brigade under Major C. McAlister whose Regiment did not engage the enemy, but were held in reserve during the Battle of Waterloo to retain the allied Belgian troops who were considered untrustworthy.

Lieutenant Shewell was awarded the Waterloo medal, the grant of two years additional service, and later had the honour in participating in the victory march down the Champs-Elysees in Paris, France. He continued in his Majesties service after the war and rose to the rank of Captain, ending his long career in Kingston, Ontario, Canada, where he died in 1879.

When I see his portrait, I am reminded of my Regency era connection to Jane Austen’s world, and she immediately seems more real to me than the icon that we have all elevated her to. Even though her critics remember that she never mentioned the Napoleonic War in any of her novels, and she wrote little about it in her letters, she was an acute observer of human nature and was well aware of the significance of the Battle of Waterloo and its profound impact on her, her family’s lives, and world history.  Happily, we never suffer because her characters did not discuss politics or the war in her novels!

3 thoughts on “Jane Austen and The Battle of Waterloo”