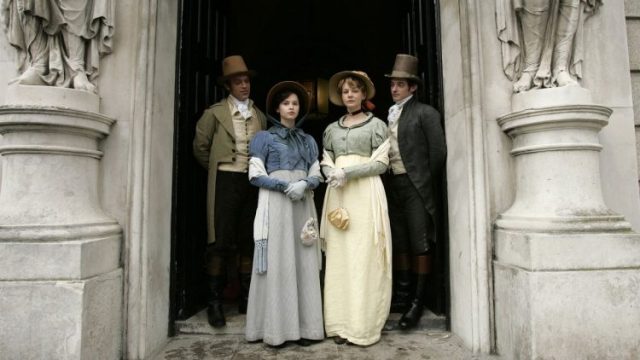 If adventures will not befall a young lady in her own village, she must seek them abroad.

The new ITV/Masterpiece PBS adaptation of Jane Austen’s novel Northanger Abbey aired on PBS last night. After viewing a pensive Persuasion adaptation last week during The Complete Jane Austen, I was all fired up to be shaken out of my Jane Austen adaptation stupor with a new production of Northanger Abbey. This is a lively story of youth, inexperience, and first love played against campy Gothic fiction. How could I not be revived?

So let me begin by telling you that two filmatic productions were never at such opposite ends of the Jane Austen gene pool emotionally and spiritually. What a relief to play with Catherine Morland and the other youngsters in the shallows.

Catherine Morland, the daughter of a rural clergyman, is taken to Bath for the season by family friends, Mr. and Mrs. Allen. Here, she makes the acquaintance of the Thorpe family, including Isabella, who becomes engaged to Catherine’s brother James, and her brother John, who declares his romantic interest in Catherine. However, Catherine’s head is turned by Henry Tilney (son of the intimidating Gen. Tilney), and she has the good fortune to gain the general’s approval. But, his approval is founded upon the exaggerated report of her family’s wealth, delivered by the foolish, young John Thorpe.

Immediately, I was impressed with the superior production quality of this adaptation. To hear the opening lines of the novel in a voice-over by actress Geraldine James as the narrator was more than encouraging, it was a downright epiphany. The costumes, scenery, and locations looked authentic. The music is period sans saxophones. The actors all look presentable. This was more than a bright beginning.

And then the actors spoke and the words were not Austen’s. My momentary fantasy was fractured. I was abruptly reminded that this WAS an adaptation by period drama icon Andrew Davies (Pride and Prejudice 1995), capable of unearthing all sorts of sexual treasures from mere words or implied meaning. Ack! I must set down my notions of our authoress reigning supreme. Only on the page, I tell myself. Only on the page. Sigh.

Still open, optimistic and engaged, I continue beyond my first reaction and was drawn into the story, which I know well and love. Our young impressionable heroine is quite believably portrayed by fresh-faced Felicity Jones. She is in fact so convincing as Catherine Morland, that in comparison to all the actresses cast to portray a Jane Austen heroine, I can find no fault and only offer praise for her performance. For such a young actress, she can swim with the big fish. 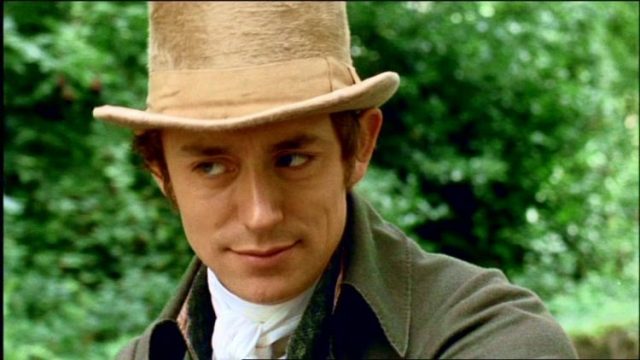 Approval of the casting of the heroine is a big step toward enjoying any film adaptation, but to also accept the choice of hero is an even greater delight. In the character of Henry Tilney actor J.J. Feild has very big boots to fill, and I shudder at the thought of miscasting. Henry is quite possibly Jane Austen’s most admired and esteem-able male hero; charming, quirky, witty and wise. A man among Austen men.

Happily, Mr. Feild had me at his first smile. I felt like a school girl again, giddy and light-headed. He was everything that I could have hoped for in Henry Tilney. Mr. Darcy beware. You have serious competition in the swoon arena.

I was also surprised by another great choice of casting in Carey Mulligan as that hip, flip, mentor of Catherine, Isabella Thorpe. Austen gave us a challenge in her character in that her unique personality, a dangerous combination of clever flirt and devil-may-care whimsy, can easily be misinterpreted. Isabella expresses her wild opinions so smoothly, that one really never knows if she is telling the truth or not. Carey Mulligan navigates beyond the shallowness of Isabella and convinces us that she is a sincere but misguided young woman, clever beyond her own abilities, and a fetching minx in a muslin frock. We cringe at her enthusiastic ill advice and imprudent actions but are softened by a memory of a friend, sister, or ourselves from an earlier day. Of all the recent crop of British actresses, I expect fine things for the career of Miss Mulligan. She reminds me of a young Dame Wendy Hiller who was cast in a favorite movie, I Know Where I’m Going. If given half a chance, Miss Mulligan could take Hollywood by storm.

Now, on to the odd bits. Advice to producers of the Austen oeuvre. Don’t let your actors resemble famous historical figures. Reverend Morland looks far too much like American patriot Benjamin Franklin. It breaks the illusion. Take care with the declotte on the bodices of your ladies’ gowns. A deep breath or a sharp twist can cause express concern from your audience. Always be authentic and film in Bath if the story calls for it. We know the difference. Plan for a minimum of two hours in length, four is better. Ninety minutes is a shockingly brief Spark Notes introduction to Austen’s intentions. Her words are there for a reason. Please spare us any further dalliances with Andrew Davies’ fantasies about underlying sex oozing in Austen novels. It is there, but need it be overemphasized?

All in all, this new ITV/Masterpiece Classic adaptation of Northanger Abbey was a delight. I will watch it again without hesitation.