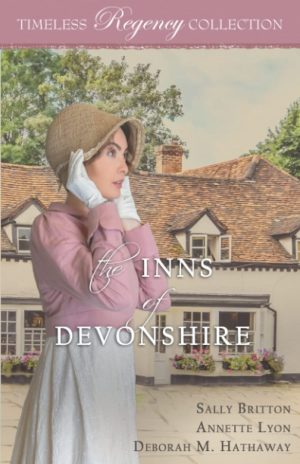 Happy Monday dear readers, Fall is here in my neck of the woods. I am busy with my, “put the garden to bed” for the winter projects and am also enjoying the change of color of the leaves. Soon it will be back to indoor activities and more reading. If you are ready (like me) to curl up with a cup of tea and a good book, I have the perfect historical romance anthology for you.

The Timeless Regency Collection is publishing its eighteenth book in the series this week, The Inns of Devonshire. This engaging anthology features three novellas by authors Sally Britton, Annette Lyon, & Deborah M. Hathaway who are known for their captivating characters and heartfelt romance. This time the theme is focused on coaching inns, a clever way to introduce us to new characters and stories.

To whet your appetite, here are the book description and an exclusive excerpt from the publisher. in celebration of its release we are participating in the virtual book tour, so be sure to check out the other stops over the next two weeks.

After years of looking after one another, Susan Baxter and her mother view their neighbors in Totnes as family. When a new landlord inherits the leases on their homes and businesses alike, Susan dreads knowing her world could change at the whim of a stranger. But when she meets Collin Stonecroft and his inquisitive daughter, her feelings shift quickly from cautionary to hopeful. Collin has lived in the confines of London boarding houses all his life, and he’s determined to give his daughter more. They check into the Seventh Star Inn with plans to return to London as soon as possible, but both find Miss Baxter and her local history lessons far too enchanting to leave behind. When Susan learns of Collin’s proposed changes to her beloved neighborhood, will she be able to help him see that some things are perfect the way they are?

The Truth about Mr. Blackmore, by Annette Lyon

Leigh’s life at the Old Grey Inn is drudgery broken by flights of fancy thanks in part to novels by Simon Blackmore. When Mattias McGrady comes to the inn for a fortnight, Leigh captures his attention. A relationship develops, and she dreads the end of his stay, which will mean a return to an unhappy life. An urgent letter to Mattias leads to him inviting Leigh to an event that stands to change both of their lives forever. If all goes well, Leigh will have a life of her choosing after all. But half-truths and lies have a way of complicating matters. When their plans go awry, Leigh loses her reputation and Mattias almost surely loses his career. Can either of them find happiness?

Ever-reliable Mary Thorne has helped her widowed mother run The Golden Mermaid Inn for years. She spends her days greeting guests, ensuring the inn runs smoothly—and dodging flirtatious remarks from passing coachmen. But she’s far too busy to pay any attention to such men, even the enticingly attractive Mr. Northcott. Known far and wide for his horsemanship, punctuality, and dallying reputation, Robert Northcott relishes his life as a coachman, especially his freedom to flirt with numerous women from inn to inn, all without the messy details of commitment. There’s just one woman who’s immune to his charms: the lovely, single landlady of The Golden Mermaid. Robert is determined to win Mary over, just as heartily as she is determined to keep her distance from him. But his carefree life is threatened when his pursual of Mary becomes more than just a game…

Since 2015, Mirror Press has been publishing the Timeless Regency Collection, a curated anthology of novellas and short stories set in early 19th century England. Featuring bestselling authors from the historical romance genre, the series has hit the USA TODAY bestselling list and charted at #1 at Amazon.com. Learn more about the series and other anthologies published by Mirror Press at their website.

Susan stepped away from the little green door and looked upward at the old building that had been her home for a decade. The passing of her father had meant leaving behind the vicarage nestled between two hills and moving into town. Above a shop. At the time, she felt the world had ended. But Mother had made the best of things, their neighbors had proved kind, and now she could think of nowhere else as home.

She jolted when she realized a stranger addressed her in the street and turned to see a man standing just behind her. He wore fine clothes and a tall black hat. He was taller than her but only by a few inches. That was the way of it for Susan, being taller than the average woman in Totnes.

She put her free hand to her chest, raising her eyebrows. She might be dressed humbly, but surely no gentleman would address a woman in the street without a proper introduction.

“Do you know anything about this building?” He nodded to the bookshop and her home above it, his blond eyebrows raised. He had blue eyes as cool as the river in winter. They sent a shiver through her.

She looked up at her home. “I believe this particular part of the street was built in the early part of last century. Farther up, there are a few houses dating back to Queen Elizabeth’s reign.”

“How interesting.” He looked up again, then down Fore Street. He faced her again. “I am Collin Stonecroft. I have only just arrived.”

“Mr. Stonecroft,” she murmured, the earlier shiver now a full shock of cold. She curtsied, basket squeezed against her side. “A pleasure, sir. I am Miss Baxter.”

“Baxter,” he murmured, narrowing his eyes at her. “Baxter. You live above the bookshop.”

She swallowed. Of course he knew her name. Her mother’s name would be on the lease for their rooms. “Yes. With my mother, Mrs. Baxter.”

He gave a sharp nod of understanding, then folded his arms and looked upward again. “Did you know this building is the newest property on the street?” He then shook his head as though it were some terrible piece of information rather than a mere fact. “Over a hundred years old.”

“The inn is even older.” She looked at the tall, white structure. “It has to be at least two hundred years old.”

“I know.” His nose wrinkled with obvious distaste, which was a shame given his otherwise handsome face. The man couldn’t be more than half a dozen years her senior, yet he had the gravitas and unpleasantness of a man twice his age.

This is the new landlord? Susan experienced a horrid feeling, rather similar to putting her foot in a shoe only to discover it damp inside. Mr. Stonecroft, abrupt and unpleasant, was not what any of them had hoped for.

When Susan spoke, her words came out almost accusatory. “Everyone has looked forward to meeting you, Mr. Stonecroft.”

“Have they?” he asked, as though distracted. The man couldn’t even be bothered to give his attention to a conversation he had started with a stranger? “Excuse me, Miss Baxter. Pleasure to meet you.”

She highly doubted it, given the way he hurried across the street back to the Seventh Star Inn. She watched him go, her perplexity bending mouth and forehead into a frown of confusion. He had sprung himself upon her only to vanish without a word of explanation.

Susan turned to study the building that housed two of her favorite places in the world. The bookshop and her home. She chewed her bottom lip as she studied the old, chipped paint, the ivy climbing one wall, and a barrel tipped on its side between the bookshop and the upstairs door. What did Mr. Stonecroft see when he looked at it for him to frown so disapprovingly and remark on its age?

Her eyes fell upon the loose paint on the door. Strictly speaking, the door’s appearance ought to be tended to by the owner of the adjacent bookshop, but Mr. Tipperman was getting on in years and likely hadn’t noticed both his shop door and the door leading to the rented rooms above needed attention.

“I do believe I know just the thing,” she murmured to herself, tracing a swirling pattern over the chips. She wouldn’t let Mr. Stonecroft sour her opinion of her home.

Stiffening her spine, Susan put her hand on the latch and opened the door, closed it, then slid the lock into place behind her. Some of their neighbors forgot to knock before coming up the narrow staircase to the rooms Susan and her mother shared. The bolted door ensured that no one else would surprise her today.

Sally Britton is a wife, mother, and author who loves the world of romance, received her BA in English from Brigham Young University, and reads voraciously. She started her writing journey at the tender age of fourteen on an electric typewriter, and she’s never looked back.

Sally primarily lives in Oklahoma with her husband, four children, and Izzie the Aussie Shepherd. She loves researching, hiking, and eating too much chocolate.

Deborah M. Hathaway graduated from Utah State University with a BA in Creative Writing. As a young girl, she devoured Jane Austen’s novels while watching and re-watching every adaptation she could. She finds inspiration for her novels during her travels with her English husband to the United Kingdom, where she draws on the beauty of the country in such places as Ireland, Yorkshire, and her beloved Cornwall. Be sure to sign up for Deborah’s Newsletter to stay updated on new releases, free and discounted Clean Romance novels, and more!

Join the virtual book tour of THE INNS OF DEVONSHIRE, a collection of novellas by bestselling authors Sally Britton, Annette Lyon, & Deborah M. Hathaway, October 4-17, 2021. Thirty-five popular on-line influencers specializing in Regency romance, historical romance, and inspirational fiction will join in the celebration of the release of the 18th book in the bestselling Timeless Regency Collection with a spotlights, exclusive excerpts, and reviews of this new anthology set in Regency England.