Compiling his thoughts on the first three of Jane Austen’s published novels, Sense and Sensibility, Pride and Prejudice, and Mansfield Park, author Robert Rodi fires a broadside at the swooning, sugary sentimentality of the modern Jane Austen fan craze.  He is appalled that such a group has turned a witty, sharp-tongued wonder into trite purple prose and slapped her silhouette on a t-shirt. Forging ahead for over four hundred pages, he dissects these Austen novels chapter by chapter, line upon line, precept upon precept highlighting a lack of romance and a decided prevalence of comedy and insight into the human condition.

I would like to give an early warning that this is not a book for those who have never read these novels. Though, it might be argued that it is exactly for those who are still considering them. My warning is for those who prefer to go into their books without spoilers and no undue influence because, reader, the author most definitely means to influence and discuss with thoroughness each character and each event and he does. END_OF_DOCUMENT_TOKEN_TO_BE_REPLACED

For those who are watching the eight-part series currently airing in the US on PBS, The World of Sanditon, by Sara Sheridan will be catnip to heighten your addiction. A copiously illustrated behind the scenes look at the making of the new television series, it also is filled with a biography of Jane Austen, historical information on the era, seaside life and health resorts, and Regency life for women.

In addition, there are spotlights on the characters and interviews with the actors who brought them to the screen. Here is a description of the book from the publisher Grand Central Publishing, details on the content, and images from the production for your enjoyment. END_OF_DOCUMENT_TOKEN_TO_BE_REPLACED 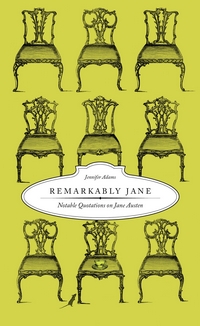 What makes Jane Austen’s writing so extraordinary? Why is she considered by many to be one of the greatest authors in the English language? What does our esteem, or our abhorrence of her reveal about ourselves, and our culture?

In Remarkably Jane: Notable Quotations on Jane Austen, one hundred personalities from actors to intellectuals have their say on literature’s queen of wit and style offering their own pithy, impassioned and often candid insights on what makes Jane Austen so special and how she influenced their own writing and lives. If you thought that you had already read most of the famous quotes on Austen over the years, then you just might be surprised by what author and editor Jennifer Adams has selected. Here are a few of my favorites to give you a teaser.

“How did this early-nineteenth-century novelist become the chick-lit, chick-flick queen for today? It is not only because she is an enduring writer. So is Melville, but bumper stickers and T-shirts read “What would Jane do?” not “What would Herman do?” Caryn James, 2007, Film Critic of the New York Times

“Edmund and Fanny are both morally detestable and the endorsement of their feelings and behaviour by the author … makes Mansfield Park an immoral book.” Kingsley Amis, 1957, Novelist and Poet

“Jane Austen? I feel I am approaching dangerous ground. The reputation of Jane Austen is surrounded by cohorts of defenders who are ready to do murder for their sacred cause.” Arnold Bennett, 1927, Literary Critic

“The function of the British army in the novels of Jane Austen is to look cute at parties.” Salmon Rushdie, 2005, Novelist, Political Figure

Since the first reviews of Austen’s novels appeared in the early nineteenth-century, people have been talking about her – good and bad – leaving a rich field of research for author and editor Jennifer Adams to select from. Here she gives us a glimpse of the most famous and well quoted remarks over the centuries and some totally modern and fresh views from contemporary sources that I was not aware of. Included are an interesting mix of prominent scholars, actors, directors and fellow writers such as Helen Fielding, Ang Lee, Colin Firth, Andrew Davies, Emma Thompson, Karen Joy Fowler, Oscar Wilde, Stephanie Meyer, Mark Twain, Andy Rooney, and Charlotte Bronte. The list is quite impressive, giving due deference to this talented writer. Interestingly, I also found a new nugget of wisdom included in the forward by the author herself.

“To those of us who love Jane Austen, she is like the brightness of burnished silver. Something lovely, with sparkle, that makes our world more beautiful. I adore her. I love the pleasure she gives with a well-turned line, the way she can make you actually laugh out loud, the bite of her sarcasm, how she lets you fall in love again and again.” Jennifer Adams

Not only is Remarkably Jane packed full of illuminating insights, it is presented in a stunningly beautiful gift quality volume with exquisite black and white illustrations reminiscent of Regency drawings, skillfully honoring and acknowledging one of the most beloved and influential English novelists of all time. For sheer joy of laughter and awe, Jennifer Adams has given us a treasure.