“Happy, happy Elinor, you cannot have an idea of what I suffer.”

“Do you call me happy, Marianne? Ah; if you knew! And can you believe me to be so while I see you so wretched!”

Happiness and suffering, and the emotional extremes that cause it, is an important theme in Jane Austen’s Sense and Sensibility that was well served in a new stage adaptation of her novel premiering at the Book-It Repertory Theatre on June 3rd at the Centre House Theatre, Seattle Center. It is the Rep’s fourth Austen novel to stage production after the highly successful Pride and Prejudice in 2004, Persuasion in 2008, and Emma in 2010. Their interpretations of Austen are always brisk, lighthearted and memorable. Jane Austen has been very good to the Rep, and obviously, audiences have felt that the Rep has been likewise to Jane Austen.

Even though Sense and Sensibility is not as light, bright and sparkling as Austen’s beloved Pride and Prejudice, it may be the most adaptable of her works for the stage. At 200 years old it remains a compelling tale touting a favorable list of dramatic attributes: dual heroines with divergent personalities; three red herring heroes who are really anti-heroes in disguise; and an incredible assortment of unscrupulous and humorous minor characters that add levity and balance to a story that is quite seriously entrenched in 19th century British inheritance laws and the plight of women who were ruled by them. Heady stuff for any playwright to embrace and adapt. Even more so for the lucky audience if they get it right.

The two heroines of this cautionary tale are Elinor (Kjerstine Anderson) and Marianne (Jessica Martin) Dashwood – one with too much sense, and the other with not enough. Each of the sisters reacts differently to their life tragedies and budding romances. Jessica Martin’s Marianne was all pure unbridled emotion: extreme, exuberant, exasperating! Never loving by halves, she gushed about dead leaves, poetry and her beaux Willoughby with a passion leaping into Bronteism.  Marianne also dips into the depths of despair after being thrown-over by her suitor, wearing her down and into a serious illness. We had wished this had been given more attention and that Marianne had not rebounded back to herself with such cheerful alacrity. 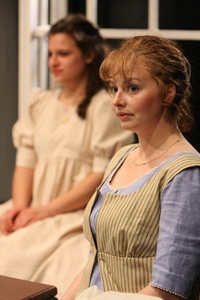 Kjerstine Anderson as the solid, staid and correct sister Elinor was surprisingly regal, imposing and privately snarky – a different interpretation than I had experienced in my reading of the novel, or in any of the movie adaptations. Questioning my previous conclusions, was Austen’s Elinor as introspective, subtle and guarded as I had thought? Anderson did a commendable job as Austen’s anchor of reason and rationality, albeit too emotionally at critical moments. I am uncertain if this change in characteristics was artistic license or by direction, but it altered the divergence in the sisters personalities and lessened some of Austen’s critical plot points. 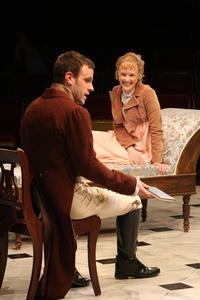 The three heroes (or anti-heroes): Edward Ferrars (Jason Marr), Col Brandon (David Quicksall) and John Willoughby (Aaron Blakely) were sensitively cast as the affable nerd, the gallant geezer and the charming cad to extreme satisfaction. Austen gave us an interesting assortment of suitors for our heroines. Often we are uncertain who the hero is because of major character flaws that act like red-herrings. In this interpretation (happily) Edward did not stutter, but he was so innocuous we wonder what Elinor saw in him. Really wonder! Marr was more than a bit of a milquetoast, and so was Quicksall as Col. Brandon who barely uttered a line for several scenes (to disconcerting effect) until he finally finds his voice making it all the more moving and admirable. Well done. When Blakely’s Willoughby gallantly arrives  to rescue the injured Marianne in a billowing greatcoat, our expectation of a Byronic hero was totally fulfilled. *swoon* The fact that he looked like a young Jonny Lee Miller did not hurt either. No wonder Marianne lost all sense. Who wouldn’t?  He was equally convincing in relaying his conflicted loyalties of money vs. love.

The minor characters in Austen’s tale are so endearingly flawed and humorous, supplying the comedy to offset the tragedy. Of note were the scheming and duplicitous Miss Lucy Steele (Angela DiMarco); selfish and manipulative Mrs. Dashwood (Emily Grogan) and her equally unappealing husband Mr. John Dashwood (Shawn Law); gossipy matchmaker Mrs. Jennings (Karen Nelson); and the jovial and obliging Sir John Middleton (Bill Johns). They brought levity to Jen Taylor’s energetic dramatization which at times had its charms and foibles. The narrative faithfully followed Austen’s own right down to some exact quotes. Huzzah! Gone though were Austen’s cynical underpinnings, subtle puns and measured pacing – all replaced by an emphasis on humor and breakneck speed. Scenes quickly altered with the draw of a curtain across the stage taking us from London to the country within seconds. Actors changed costumes by adding layers as they delivered lines on stage. Spoken dialogue shifted to narrative recited directly from the novel in one breath. It was exhausting and exhilarating. Austen encapsulated and accelerated for the modern stage.

We enjoyed every line and every moment, but we were happy to wind down afterwards with a cup of tea and the novel.

We are very fortunate to have one of the nation’s premiere small theater companies right in our own backyard. For the last 20 years the Book-It Repertory Theater of Seattle has been exclusively adapting written work for the stage. Among the sixty plus world premier adaptations they have presented are stage productions of three Jane Austen novels: Pride and Prejudice (2004), Persuasion (2008) and Emma (2010). Now in honor of the bicentenary of the publication of Jane Austen’s first published novel, Sense and Sensibility will premiere on Friday June 3, 2011 at the Center House Theatre.

In Austen’s first published novel (1811), the Dashwood sisters find that love is an unpredictable struggle against the most important social values: family, honor, and wealth.  As teens, Elinor and Marianne’s family fortunes take a turn when they lose their father, and their welcome in his home, now owned by their half-brother and his overbearing wife. With a move and a few chance meetings, Elinor falls for the intelligent and reserved Edward Ferrars, while Marianne dotes upon the handsome John Willoughby. Through Elinor’s sense and Marianne’s sensibility, this sprightly tale wends along the twisting path of love among the English gentry.

Directed by Makaela Pollock and playscript by Jen Taylor, of all of Jane Austen’s novels, Sense and Sensibility might prove to be the most adapatable. We are all anticipation of its high voltage emotional elements and endearingly flawed characters being brought to the stage. Just the thought of drama-queen Marianne Dashwood emoting in body and spirit sends shivers and chills, and the humor of the Middletons and the Misses Steeles should keep us laughing.

in Book-It’s Sense and Sensibility

After attending their production of Persuasion in 2008, I am looking forward to experiencing Book-It’s unique style where the actors recite much of the text as it was originally written – but with the added benefit of costuming, lighting and the excitement of a live production. I will be attending on Sunday, June 12 with a group of Janeites so be sure to check back for my review.

Emma, a timeless love story from one of the most widely read writers of all time, is now a musical, and will once again entice modern audiences to fall in love with one of Jane Austen’s most adored characters. Emma, a beautiful and clever young woman who prides herself on her matchmaking ability, is preoccupied with romance yet is clueless to her own feelings of love. When she takes on a young friend as her latest project, her well-intentioned efforts misfire, leading to a whirlwind of complications. Deliciously charming, this new romantic comedy from Tony Award nominated composer Paul Gordon and directed by Tony Award nominee, Jeff Calhoun, brings Jane Austen’s masterpiece to musical life.

(Can you identify the four Bennet sisters left to right in this photo? Answer at bottom of post!)

Jane Austen’s beloved novel Pride and Prejudice continues to allow us to “make sport for our neighbours, and laugh at them in our turn” as a new stage production opened on February 21st, 2010 at the Oregon Shakespeare Festival in Ashland. Adapted by Joseph Hanreddy and J. R. Sullivan, this play premiered to positive reviews at the Milwaukee Repertory Theater in March 2009.

Although the theatricalization of novels can be enormously challenging, Hanreddy and Sullivan found a way to retain every major subplot and nearly every character. More importantly, the collaborators captured “Pride and Prejudice’s” tone when they moved the book to the stage. Damien Jaques Milwaukee Journal Sentinal

Hanreddy is also the artistic director the the Milwaukee Rep and discusses his choice and experience adapting Austen’s classic novel to the stage in this interesting interview.

The reviews from the Oregon production have been rather mixed, so one wonders out loud if and how they have changed it or, now that it is on the road and does not have home team advantage of local publicity that reviewers are being more honest. Horrors! Marty Hughley of the Oregonian has given it the worst possible insult – that it lacks passion!

It’s also bloodless, with little in the way of sexual heat or even emotional charge to the stop-start romances that form the heart of the story. Part of that’s due to a sense of period-piece restraint, but part is due to a leading man, Elijah Alexander, who in his few OSF roles so far has distinguished himself as professionally handsome, and little else. Marty Hughley Oregonian

On an upbeat note, its charms do appear to outweigh its foibles:

In Jane Austen’s much-loved novel of manners, “Pride and Prejudice,” love and marriage may not go together like a horse and carriage. But the new stage adaptation by Joseph Hanreddy and J.R. Sullivan that opened Saturday at the Oregon Shakespeare Festival positively moves at a canter. It sparkles and enthralls and is delightfully played out in a charming, minimalist production with emphasis on dancing and music. Robert H. Miller Ashland Daily Tidings

Kate Hurster and Elijah Alexander spar, and ultimately woo, with sparks worthy of Jennifer Ehle and Colin Firth in the 1995 BBC version of the story, which launched the wave of Austen mania that continues, and which remains superior to the 2005 Hollywood version. Bill Varble Medford Mail Tribune

It’s exactly what you’re hoping for when you buy the tickets. It’s beautiful to look at, well-acted, romantic as well as melodramatic. John Casker, Ashland Link

Regardless of the decidedly mixed opinions, this Janeite is planning and plotting an excursion to Ashland for her birthday in May, and will politely remind reviewers that Bennet is spelled with one T and …

“It is particularly incumbent on those who never change their opinion, to be secure of judging properly at first.” Elizabeth Bennet Chapter 18

Pride and Prejudice at the Oregon Shakespeare Festival runs until October 31st, 2010 at the Angus Bowmer Theater in Ashland, Oregon. Additional information and tickets can be found online OSF website. 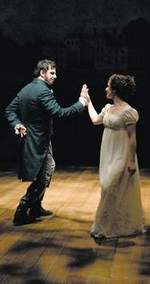 *Answer to the photo quiz above: P&P Bennet sisters left to right: Elizabeth (Kate Hurster), Kitty (Kimbre Lancaster), Mary (Christine Albright) and Jane (Nell Geisslinger). Ok! When will poor Mary Bennet not be portrayed with glasses and high-neck frocks? No hope of ever, I fear.