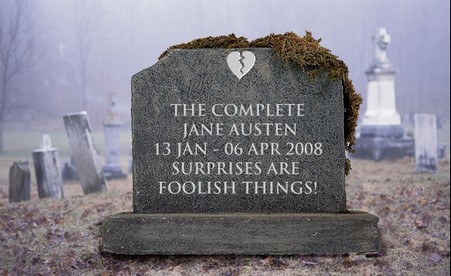 “This present from the Campbells,” said she — “This pianoforté is very kindly given.”

“Yes,” he replied, and without the smallest apparent embarrassment. “But they would have done better had they given her notice of it. Surprizes are foolish things. The pleasure is not enhanced, and the inconvenience is often considerable. I should have expected better judgment in Colonel Campbell.” Emma Woodhouse & Mr. Knightley, Emma, Chapter 26

Gone, but not forgotten, The Complete Jane Austen series on PBS ended last Sunday with the final episode of Sense and Sensibility. It was a bittersweet moment for me, kind of an anti-climatic ‘day after the wedding’ kind of funk. And now, I feel a deep malaise setting in! Whatever shall we all talk and ruminate over? END_OF_DOCUMENT_TOKEN_TO_BE_REPLACED 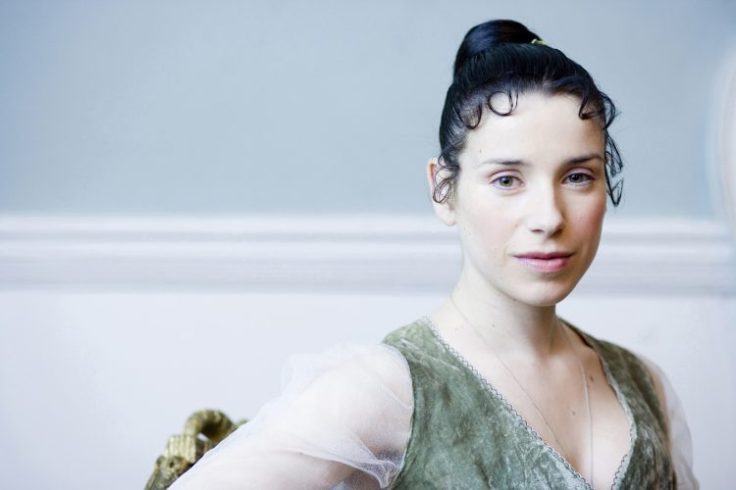 A new adaptation of Persuasion will air on Masterpiece PBS tonight. Based on Jane Austen’s 1817 novel, its themes of patience, fortitude, and second chances ring true to today’s audience even after two hundred years. The story of Anne Elliot, a twenty-seven-year-old unmarried daughter of an aristocrat who was advised seven years earlier to decline an offer of marriage from a dashing young Royal Navy officer she loved because his social standing was not on par with her family’s rank, is one of Austen’s most poignant. When Wentworth reappears in her life as an established, wealthy, and eligible suitor, every unmarried young woman in the neighborhood takes notice. How the two react to this uncomfortable situation and work past their regret and disappointment is one of classic literature’s most endearing stories.

Adapting Austen’s story to the screen takes a highly sensitive writer and director. This new ITV/Masterpiece PBS production of Persuasion is the first installment of The Complete Jane Austen series this year on PBS which will also include new productions of three other new adaptations of her major novels, Northanger Abbey, Mansfield Park, and Sense and Sensibility, and a biopic Miss Austen Regrets. There will also be an encore presentation of Emma (1996) and Pride and Prejudice (1995) to complete the lineup. This new Persuasion has a promising ensemble of accomplished British actors and crew to support Austen’s narrative. Being both a tragedy and a comedy, one really never knows how it will be handled. END_OF_DOCUMENT_TOKEN_TO_BE_REPLACED

1 DAY TO PERSUASION ON PBS

Pop the popcorn and plump the pillows on the settee! The long wait is almost over! What has been talked about and anticipated for some months, will shortly come to pass. The premiere of the latest adaptation of Jane Austen’s classic novel of love and redemption, Persuasion, airs tomorrow night. Staring Sally Hawkins as our heroine Anne Elliot, and Rupert Penry-Jones as the dashing Captain Wentworth, it promises to be and grand evening presented by those great folks at Masterpiece Classic. Further details can be found at An Austen New Year Awaits. Don’t miss out on all the Regency drama and fun!

3 DAYS TO PERSUASION ON PBS

The excitement is building. Mark your calendars and set your watches for the premiere of the latest adaptation of Jane Austen’s classic novel of love and redemption, Persuasion, staring Sally Hawkins as our heroine Anne Elliot, and Rupert Penry-Jones as the dashing Captain Wentworth. Presented by those great folks at Masterpiece Classic. Further details can be found at An Austen New Year Awaits. Don’t miss out on all the Regency drama and fun!

7 DAYS TO PERSUASION ON PBS

Mark your calendars and set your watches for the premiere of the latest adaptation of Jane Austen’s classic novel of love and redemption, Persuasion, staring Sally Hawkins as Anne Elliot. Presented by those great folks at Masterpiece Classics. Further details can be found at An Austen New Year Awaits. Don’t miss out on all the Regency drama and fun!

Do not be surprised at finding Uncle Henry acquainted with my having another ready for publication. I could not say No when he asked me, but he knows nothing more of it. You will not like it, so you need not be impatient. You may perhaps like the heroine, as she is almost too good for me. Letter to niece Fanny Knight, 23 March 1817, The Letters of Jane Austen

In this letter to Fanny Knight, the daughter of her brother Edward (Austen) Knight, Jane Austen refers to “having another ready for publication”, which is her last completed novel, Persuasion. It was written between 8 August 1815 and 16 July 1816, with final chapter revisions in August 1816. The novel would be published posthumously after her death, bound together with the novel Northanger Abbey in 1818.

Jane Austen’s coyness in diverting her niece’s interest in reading her new work by foretelling her reaction is typical of the banter she exercised with her family and friends regarding her view of the quality and importance of her work. Modest? I think not. Her next remark regarding her further prediction of Fanny’s reaction to liking the heroine Anne Elliot, “for she is almost to good for me”, surely qualifies as a sideways complement to herself. For what writer who has ever created a character does not find a bit of themselves fashioned into their nature? And – – Anne Elliot exemplifies some of the finest and amiable qualities of any of Jane Austen’s creation.

It is interesting to note that the working title for the novel was The Elliot’s, and was later changed after her death by her brother Henry Austen to Persuasion. In this instance, I must agree with his choice. The novel is not so much about the Elliot family, as it is about the life choices we make, and in particular how others can influence us. Anne Elliot’s choice to be persuaded by her family friend Lady Russell to decline an offer of marriage by Captain Wentworth will take her on a journey of loss, patience and faith; – – not unlike Jane Austen herself. You can read more about Persuasion’s plot and characters at these fine links.

Be sure to mark your calendars and set your watches for the premiere of the Masterpiece Theatre presentation of The Complete Jane Austen, on Sunday the 13th of January at 9:00pm. The first adaptation will be Persuasion, staring Sally Hawkins as our heroine Anne Elliot. You can read further details on the series in my post, An Austen New Year awaits.