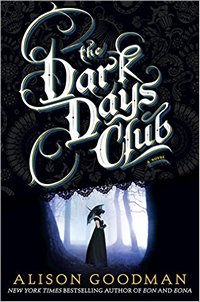 Fantasy novels with a supernatural bent are all the rage right now. So, if you love a battle between the forces of good and evil… all set against the backdrop of the upper-crust society of 1812 London, then The Dark Days Club by Alison Goodman should be on your reading list.

We meet 18-year-old Lady Helen Wrexhall on the eve of her presentation to Queen Charlotte. Helen’s mother, who drowned at sea ten years before, was allegedly a traitor to England, and Helen’s current guardians—her aunt and uncle—really hope this won’t affect Helen’s chance of making a good marriage. After all, isn’t that the best that any young lady with fortune and tainted family connections can hope for?

But, Helen has other ideas. Wilder ideas. She gets the feeling she’s meant for something more than ballrooms and husband hunting. When she meets the mysterious Lord Carlston, who has quite the checkered past himself, she discovers that the growing spirit inside her actually points to the rare ability to identify and destroy a group of supernatural baddies that are overrunning England. Will Helen follow her demon-fighting destiny with Lord Carlston? Or will she resign herself to the life of a proper English wife instead?

The Dark Days Club is the first in what will be a series of novels focused on Lady Helen and her adventures in Regency London. It actually reminded me a lot of The Mortal Instruments series by Cassandra Clare (which actually has a Victorian spinoff of its own). The basic premise is the same—a young girl with a mysterious family history finds out she actually has the ability to fight supernatural villains. It’s miles from a Jane Austen novel, but the author does a great job of giving us the Georgian-era feel while still mixing in elements of mystery and fantasy. END_OF_DOCUMENT_TOKEN_TO_BE_REPLACED 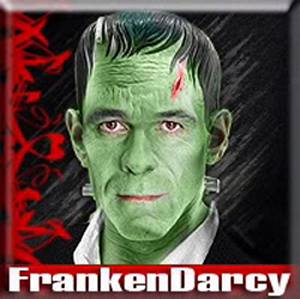 Just to put you into the spirit here is an illustration of FrankenDarcy by Bonnie Carasso, a talented graphic designer with a sense of humor. I met Bonnie in the Austenprose Facebook Group. This graphic is her cheeky interpretation of actor David Rintoul as Mr. Darcy in the 1980 BBC/PBS Pride and Prejudice mini-series doing the monster mash as Frankenstein. The inside joke is that his interpretation of Austen’s romantic icon was a bit stiff (as in dead) compared with actors Colin Firth’s (1995) and Matthew Macfayden’s (2005) versions!

Gothic fiction was a big hit in the late 1700’s. Authors like Horace Walpole’s, The Castle of Otranto (1764), Ann Radcliffe’s The Mysteries of Udolpho (1794) and The Romance of the Forest (1791) influenced and inspired a young Jane Austen to write her own Gothic parody of the genre, Northanger Abbey, published after her death in 1817. If you have not had the opportunity to read it yet, it is hilarious. You don’t know what you’re missing!

Today there are many Austen-inspired paranormal novels featuring zombies, werewolves and vampires interlaced into her classic stories and characters. If you liked Pride and Prejudice and Zombies by Seth Grahame-Smith , Mr. Darcy’s Bite by Mary Simonsen or Georgiana and the Wolf by Marsha Altman you might be ready for a spunky version of Austen’s creepmouse heroine from Mansfield Park, Fanny Price, like you have never seen her before. END_OF_DOCUMENT_TOKEN_TO_BE_REPLACED

From the desk of Veronica Ibarra

As if reading about the continued lives of our favorite characters from Pride and Prejudice and that of their children is not fascinating enough, send one Georgiana Bingley to seminary in France, throw in a murder with the rumor of a werewolf, and you potentially have something quite interesting. Such is Marsha Altman’s Georgiana and the Wolf, the sixth installment of her Pride and Prejudice Continues series. If you have not read any of the previous books then you are in luck as this one, though connected via Georgiana, can stand on its own without any confusion that reading a series out of order can cause.

Inspector Robert Audley has been pulled off a case in Paris and ordered to a small country town where the Marquis de Maret is rumored to be a werewolf and a murderer. With his engagement to Lady Heather Littlefield threatened by these rumors the marquis is eager for Inspector Audley to put an end to them. But things quickly become complicated as “the famed inspector of Paris” Audley uncovers a tangled web of clues that point to not one but two killers as more are found dead, and finds that Lady Littlefield’s companion Georgiana Bingley seems to be far more adept at gathering information than he.

Georgiana Bingley is the daughter of Charles Bingley and Jane Bennet, but little is made of this. All that is familiar to the avid Austen fan goes largely by the wayside because even though Georgiana is central to the story, where she comes from, who her family is, and any dowry attached to her is of little significance to this story.

The main character of this tale is Inspector Audley. It is through his eyes (and thoughts) that we are led through his investigation and distraction. Because of this we are kept focused on the case, but even as Audley finds the case baffling, it is clear that his distraction is the only thing really keeping him from solving the case. Though the particulars were interesting enough to keep me reading, I did not find myself baffled by it in the least. END_OF_DOCUMENT_TOKEN_TO_BE_REPLACED