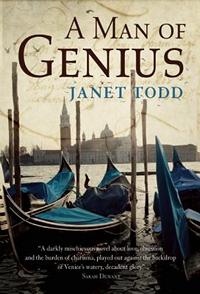 From the desk of Shelley DeWees:

Once as a child he’d had himself electrocuted to see how it would feel. He’d let the current course through him. He’d felt vibrant.

Perhaps he’d never been the same since, just full of sparks. Perhaps touching him she’d taken on some of his electricity, only instead of making her more alive, it had singed and dulled her.

Confident, theatrical, and opinionated, the genius anti-hero of Janet Todd’s novel—which is a departure from her well-known nonfiction work on Jane Austen and others—positively reeks of potential for unusual behavior, right from the start. He’s fussy and aloof; he gets upset if he is forced to walk through pale-colored soil in dark boots; he balks at teacups that are “coarse” or “thick” and favors a more delicate model of his own choosing. He is Byronically volatile and tense, but in Ann’s eyes, Robert James is the picture of perfection, a man she simply cannot ignore. Their first meeting at a party in 1816 leaves her reeling with a desire to hear more of his rhetoric, and to become familiar with his not-so-attractive yet completely arresting face—for this face, at that moment, becomes the face to Ann. “Robert James,” she acknowledges within five pages, “changed everything.”

And it’s true. At the beginning of the story, Ann St Clair is a different person. She’s plainly-dressed—relying as she does on her Gothic writings as her only source of income—and “not dissatisfied with her mode of life” in her small lodgings. Yet as soon as she connects herself to Robert James, she must change, first by demurring to his opinions of proper dress, and later, far more destructively, by abandoning her life in order to accompany him to Italy. This, in fact, is the point in the story where the relationship begins to degrade in haste: With one snide comment after another, one slight, one violent outburst, one mad musing after another, Ann and Robert James fall apart. Quality of life deteriorates for both of them, and in a long crescendo, we are swept to the inevitable conclusion of a relationship built on half-truths and unspoken grievances. Yet you need not worry that it will be predictable; rather, it’s quite surprising how it all shakes out in the end. END_OF_DOCUMENT_TOKEN_TO_BE_REPLACED