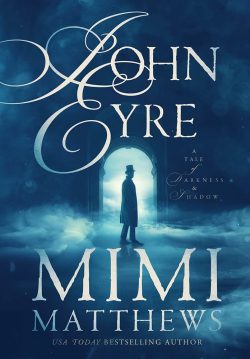 From the desk of Sophia Rose

Reader, I must confess that I went into this book totally blind. No blurb, no captions, and a mere glance at the cover. This is because I spotted the title and the author, and it was all over. I needed a gender swapped Jane Eyre-Dracula mash up to quench my insatiable curiosity and wonder over such a combo. Some authors might have difficulty pulling off such a feat, but I did not have a doubt in the world that in Mimi Matthews’ capable hands that John Eyre would dazzle.

John Eyre arrives at his new place of employment on a cold, rainy, and foggy night. He barely catches a glimpse of the new Yorkshire countryside or Thornfield Hall. His mind is weighed down by the past and his head aches dreadfully.  He craves the laudanum that he has been using to dull his memories and pain. But it is not long before natural curiosity for his peculiar new charges, his absent employer, and his new surroundings rouse him. Thornfield Hall might be remote, creak with odd noises, and the Yorkshire environs bleak, but John Eyre starts to settle in and feel a modicum of peace. Then Mrs. Rochester arrives.

Mrs. Rochester is changeable, direct, capable, and very much in charge. He senses there is great mystery from this well-traveled world-weary woman. She challenges him and his notions of women, and the world he has barely experienced in his humble circumstances. His very stolidity and sureness END_OF_DOCUMENT_TOKEN_TO_BE_REPLACED