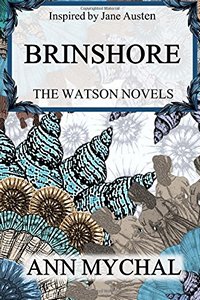 Open any of Jane Austen’s six completed novels and you’re guaranteed a moving story told with wit and insight, but what fan doesn’t wish Austen had time to complete more books. That’s why I treasure well done Austen-inspired fiction, so when I discovered Ann Mychal had written Brinshore, her second Austen themed book, I was full of hopeful anticipation. Mychal’s first novel, Emma and Elizabeth, is among my favorite adaptations. It completes Austen’s intriguing unfinished novel The Watsons by telling the story of two Watson sisters, Emma and Elizabeth, daughters of an impoverished clergyman. The girls were raised separately under very different conditions but reunited when they were both young ladies. Brinshore continues the tale, this time focusing on their daughters Emma (named after her mother) and Anne, and it takes its inspiration from another of Austen’s novel fragments, Sanditon.

Cousins Emma Osborne and Anne Musgrave could not be more different in temperament. Emma is an outspoken girl, direct in her opinions in the mode of her Mr. Darcy-like father, Lord Osborne, while Anne is a gentler, nature-loving soul who goes into rhapsodies over a piece of seaweed. Neither girl has experienced the hardships of their mothers because both of those women married well. The novel opens in 1816 so the wars with Napoleon are over and Captain Charles Blake will soon be returning to their community, a circumstance that Emma awaits with much excitement.

The end of the wars also means that people are ready to enjoy themselves more, and in that spirit the girls’ utterly practical, unromantic Aunt Harding (reminiscent of Charlotte Collins) shocks everyone with a big announcement. She’s decided to sell the Chichester house she shared with her now-deceased husband to move to Brinshore, a tiny seashore town not far from Sanditon, and she’s inviting both her nieces to come to stay with her. Anne is excited right away–the seashells she can collect! The tide pools she can sketch! But Emma is indifferent, she’d rather go to more fashionable Brighton, until she learns that Captain Blake will be spending time in nearby Sanditon. END_OF_DOCUMENT_TOKEN_TO_BE_REPLACED