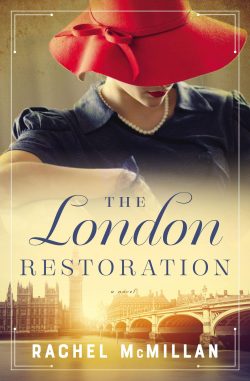 Hey-ho Janeites! Did you know that in historical fiction the fabulous fifties are the new forties? Yes, after years of WWII stories, novels set during the post-war years are now being published more frequently. I adore the Granchester mysteries series by James Runcie, and later this month The Jane Austen Society, by Natalie Jenner releases on May 26th. To add to the list, I am happy to introduce you to another forthcoming historical set in this time-frame releasing this summer. The London Restoration, by Rachel McMillan, is one of those atmospheric books that will take you away to another time and place, immerse you in history and wrap you in romance.

Set in post-World War II London, it features architectural historian Diana Somerville who is rebuilding her life and her marriage after five years of a devastating war. Blitzed London, Russian spies, and an ancient Roman artifact stir the plot.

If you are up for adventure, espionage, and romance, check out the book description and the exclusive excerpt that has been generously supplied by author Rachel McMillian. The London Restoration releases on August 18th, 2020, so be sure to add it to your TBR list.

Determined to save their marriage and the city they love, two people divided by World War II’s secrets rebuild their lives, their love, and their world.

Featuring a timeless love story bolstered by flashbacks and the excavation of a priceless Roman artifact, The London Restoration is a richly atmospheric look at post-war London as two people changed by war rebuild amidst the city’s reconstruction.