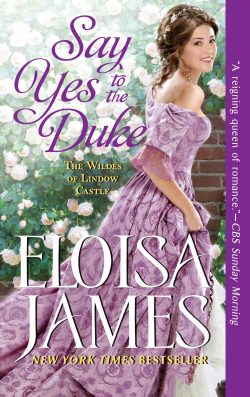 The Wildes of Lindow Castle is a Georgian romance series penned by the elegant writer, Eloisa James. Say Yes to the Duke, the fifth entry in the series features Viola Astley, whose mother is married to the Duke of Lindow. By her own reckoning, Viola is “…the opposite of a Wilde…timid, tongue-tied, and fairly useless.”

At her first ball, an apprehensive Viola retreats to a corridor used mainly by servants. She accidentally comes upon a couple having a liaison. When the man realizes he and his lover are no longer alone, he accuses the woman of arranging for a witness so he’ll be forced to marry her. He speaks cruelly, and long after the incident Viola continues to feel “…a wave of horror at the memory of the man’s scathing voice and his brutal strength.” From then on, she’s petrified of social situations and avoids them.

The brute in question turns out to be the Duke of Wynter, Devin Lucas Augustus Elstan, the hero of the story. Living mainly in the country, he shuns society and declines to attend parliamentary sessions. Raised in isolation by parents who despised each other, the duke was educated at home. His father was known for challenging nearly every man he came in contact with to a duel. At first, this seems merely quaint, but we later find out that he was abusive to Devin.

When Viola comes of age, her parents insist she have a debut season along with her beautiful and flamboyant stepsister Joan. She’s dreading the ball that will mark her first official appearance in Society. Across town, Devin tells his cousin Otis that he intends to find a bride during the Season. Devin knows of the Wildes, and Otis enlightens him further.

During the conversation with Otis, Devin has an epiphany of sorts. He “…realized that his life was satisfying but somewhat cold.” Otis and his sister “…darted in and out of his house like fireflies, shining with warmth and cheer, and he treasured that.” Apparently, the duke has a heart.

Prior to her debut ball, Viola meets the new vicar, Mr. Marlowe. He’s very handsome, and his eyes radiate kindness. In his presence, “…her stomach felt entirely peaceful.” She convinces herself that the warmth she feels towards him is love. Unfortunately, the man is betrothed to the vile Miss Pettigrew, England’s biggest do-gooder prude. Viola makes it her mission to save Mr. Marlowe from his “domineering” intended wife because she wants him for herself.

On the evening of the ball, Viola heads to the library for a secret meeting with Mr. Marlowe. Instead, she finds the Duke of Wynter engaged in conversation with his uncle. She overhears him telling Devin that he should take Viola as his bride since her father was a great friend of Devin’s father. Viola is furious when the duke says he can’t marry her because she’s not a “real Wilde.”  For the first time in a long while, Viola feels sick.

When Marlowe arrives, and Viola emerges from her hiding place, she and the duke immediately begin a combative relationship. But he’s charmed and captivated by her beauty and boldness, however, and begs her for the supper dance. She turns him down. It’s only after the duke tells her, sometime later, that she “…is clearly a real Wilde” that she agrees to become friends. He wants to “woo” her, but she resists, saying she not the type of woman to be a duchess. Devin is relentless, and there’s no denying Viola feels a powerful attraction to him. It dawns on her that he possesses certain qualities she finds appealing: he’s calm and confident; his eyes gleam with emotion, and he’s well-liked by those who know him best. Could Devin actually be more tempting than Mr. Marlowe?

The vulnerabilities of both hero and heroine are revealed and ultimately conquered, but it’s Viola who shines. In Eloisa James’s deft hands, she is transformed from a reluctant and immature girl to a woman of grace and self-assurance.

The pacing of the book was rather slow initially. While a bit of family background is helpful to the reader, this felt like too much. Because Devin and Viola don’t actually meet until page 57, readers may lose patience. And by the time Viola begins to doubt the authenticity of her feelings for Mr. Marlowe, we’ve moved on and are more than ready for her and Devin to realize they belong together.

It’s not necessary to have read the other books in the Wildes of Lindow Castle series to appreciate this one, however, doing so will offer insight into Viola’s family and provide hours of stolen pleasure besides. Say Yes to the Duke continues the saga of the Wildes, with James’s trademark eloquence, humor, and irresistible characters we can’t help falling in love with.

7 thoughts on “Say Yes to the Duke: The Wildes of Lindow Castle (Book 5), by Eloisa James—A Review”