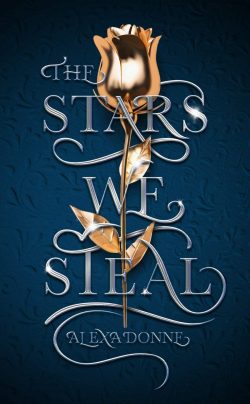 TGIF Janeites. Do you have your reading lined up for your weekend yet? If not, I present for your consideration, The Stars We Steal, a new young adult novel inspired by Jane Austen with an out of this world twist.

Yes, it’s Persuasion in space. Who would’ve thought Jane Austen’s Regency-era plot and characters could be transported on to a spaceship hundreds of years in the future?

Author Alexa Donne did! She has re-imagined Miss Anne Elliott and Captain Wentworth as two teens in the future traveling through the galaxies. Here are a book description and an exclusive excerpt from the publisher to give you a taste of Austen from another era and universe.

Engagement season is in the air. Eighteen-year-old Princess Leonie “Leo” Kolburg, heir to a faded European spaceship, has only one thing on her mind: which lucky bachelor can save her family from financial ruin?

But when Leo’s childhood friend and first love, Elliot, returns as the captain of a successful whiskey ship, everything changes. Elliot was the one who got away, the boy Leo’s family deemed to be unsuitable for marriage. Now he’s the biggest catch of the season and he seems determined to make Leo’s life miserable. But old habits die hard, and as Leo navigates the glittering balls of the Valg Season, she finds herself falling for her first love in a game of love, lies, and past regrets.

Fans of Katharine McGee and Kiera Cass will be dazzled by this world of lost love and royal intrigue.

I wended my way through gallery after gallery, into the royal ballroom (half of it cordoned off due to fire damage), through to the library, one of my favorite spaces on board. No one read real books anymore, but the library kept hundreds of them carefully under glass, in addition to the digital stations where the residents could reload their tabs with more things to read. Plus, it was where the Scandinavian housed historical documents, cultural artifacts, and more from Earth’s history. I browsed the exhibits I’d looked at a hundred times.

This was where I’d found the idea for my water-filtration system, a home-improvement project I’d undertaken several years ago to help the Sofi extend precious resources. A thought slithered up my spine unbidden. If other ships were on rations, water rations especially, my system could offer some relief. It could save lives. And the license fees to use it would save my family.

I hated myself for thinking it, profiting off misery. But this presented a real opportunity. Perhaps I could appeal to other ships, get their buy-in first, then use the startup funds to get my patent. All it would take was one ship saying yes. I wouldn’t need to wait out the Valg to get the Orlovs’ rent. I wouldn’t need the Valg at all. The thought of escaping this barbaric marriage ritual filled me with such relief that it overpowered the guilt for just a moment.

I picked up one of the library’s public tab readers and wandered through a maze of glass-encased stacks to an overstuffed chair. I disappeared into the latest Jupiter Morrow mystery for several hours, but then a musical laugh pinged my ears. I rose, creeping through the stacks, following the sound until I spotted the source. Evgenia and Elliot were strolling through. I shot down into a crouch, ducking low behind a display case so they wouldn’t see me.

“This is no laughing matter, Evy,” I heard Elliot’s cutting response to whatever Evgenia had been laughing about. “They might execute her.”

“For a little interruption? They’re overreacting, don’t you think?”

My breath caught in my throat. They were talking about last night.

“You expect them to underreact? Someone crashed their special party and called them on their bullshit. Heads will roll.”

There was a long silence, and for a moment I wondered if they’d somehow snuck off without my hearing. I didn’t dare pop around the display case to check. But then Evgenia spoke, her voice low.

“Are you worried, then?”

Elliot’s response was tight. “I know what I’m doing.”

What by the moon was Elliot up to? He couldn’t be involved with Freiheit, could he? It was awfully convenient that he was outside the ballroom when everything happened, come to think of it. Father said they had hacked the system from the inside.

“Now, what are you going to wear tonight?” Evgenia abruptly changed tone, light and bright once more, and Elliot returned a low response I couldn’t hear. “Elliot Wentworth, I will not allow you to abandon me to those vultures. You are going. We have work to do.”

“They seemed to like you well enough. Hardly vultures,” Elliot said.

“Please,” Evgenia spat. “They’re happy enough to drink and laugh with us, but we both know we’re nothing to them but crude new money. Once they know how Max makes his fortune, they’ll devour us like jackals.”

“Don’t tease me. You’re the one who wanted to come here. The Valg Season is the perfect opportunity, you said.”

“Maybe I was wrong.”

I imagined Evgenia’s ears steaming, but her next words sounded nothing but amused.

“But what about that girl? Don’t you want to see her?”

“Leo?” Elliot replied. I leaned precariously forward, trying to get closer. They had paused momentarily. “We said hello last night.”

“Um, yes, I know, I was there,” Evgenia said with a laugh. “Anyway, I didn’t mean her. I was talking about the other one. Carina.”

“Carina?” Elliot parroted back, and my heart froze in my chest. I couldn’t decipher his tone. If only I could see them properly. “She’s so young.”

Evgenia was rapidly falling in my esteem.

Exactly! I wanted to scream through the door.

“Well, now she’s practically a woman. Beautiful. And a bit sweet on you, I think.”

Dammit, I couldn’t hear Elliot’s response—they’d started moving again. All I heard was Evgenia’s tinkling laugh, as if Elliot had said the most hilarious thing.

5 thoughts on “A Preview of The Stars We Steal, by Alexa Donne”