The highly anticipated release of Love & Friendship, filmmaker Whit Stillman’s new adaptation of Jane Austen’s novella Lady Susan, arrives this Friday, May 13 in Los Angeles, New York and Paris with national release set for May 27, 2016. Early praise for the film is more than encouraging: “FLAT-OUT-HILARIOUS. Jane Austen has never been funnier.” – The Telegraph; “Whit Stillman and English novelist Jane Austen make for a delightful pairing in this comedy of manners.” – The Star.com; “Kate Beckinsale magnetizes the screen.” – Variety.

Humorous and witty, devious and scheming, or Downton Abbey with laughs, LOVE & FRIENDSHIP is an adaptation of young Jane Austen’s novella Lady Susan, believed to have been written in the mid 1790s but revised up to a fair copy prepared in 1805 and finally published by her nephew, James Edward Austen-Leigh, in 1871.

Set in the 1790s, earlier than most Austen tales, LOVE & FRIENDSHIP concerns beautiful young widow Lady Susan Vernon (Kate Beckinsale) who has come to Churchill, the estate of her in-laws, to wait out colourful rumours about her dalliances circulating through polite society.

Whilst ensconced there, she decides to secure a husband for herself and for her daughter, Frederica, played by Morfydd Clark.

Chloë Sevigny, who starred with Beckinsale in Stillman’s The Last Days of Disco (1998), plays Lady Susan’s friend and confidante Alicia Johnson, with Stephen Fry as her husband, the “very Respectable” Mr. Johnson.

The waters are troubled by the arrival at Churchill of the handsome, eligible Reginald De Courcy (Xavier Samuel) and silly but cheerful — and very rich — Sir James Martin (Tom Bennett).

After a series of dramatic turns at Churchill, Lady Susan finally risks destruction when her jealous rival, Lady Lucy Manwaring (Jenn Murray), arrives in London to make a shocking revelation, leading to the denouement of denouements.

In addition, Whit Stillman has written a companion novel to the film also entitled Love & Friendship with the added subtitle: In Which Jane Austen’s Lady Susan Vernon Is Entirely Vindicated. For those who have read Austen’s original novella, you will remember that Lady Susan Vernon is described by Reginald De Courcy as “the most accomplished coquette in England.” and by others as devious, wicked and “with a happy command of language, which is too often used, I believe, to make black appear white.” To vindicate her scurrilous behavior is an intriguing premise indeed!

Enter a chance to win one (1) prize package inspired by Love & Friendship including one (1) $25 Amazon gift card, one (1) Love & Friendship T-Shirt, one (1) bookmark and one (1) copy of the book Love & Friendship: In Which Jane Austen’s Lady Susan Vernon Is Entirely Vindicated by Whit Stillman, by leaving a comment with this post by 11:59, May 17, 2016. Winner to be announced on May 18, 2016. Open to US mailing addresses only. Prizing courtesy of Roadside Attractions. Good Luck to all!

Love and Friendship is also part of the Seattle International Film Festival on May 21 and 22.  I hope to attend. 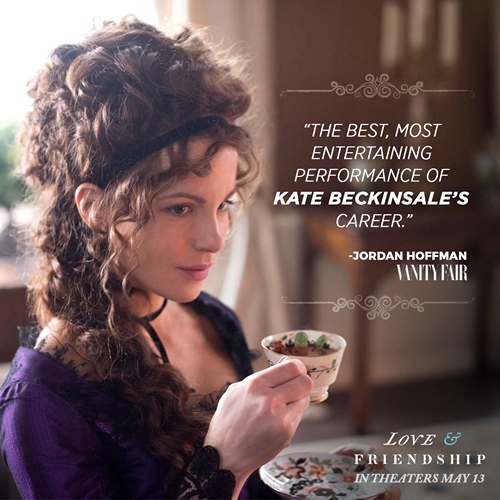 Disclosure of Material Connection: We only review or recommend products we have read or used and believe will be a good match for our readers. We are disclosing this in accordance with the Federal Trade Commission’s 16 CFR, Part 255: “Guides Concerning the Use of Endorsements and Testimonials in Advertising.”