We wonder why tricorn hats went out of style. They were so commanding. In the 18th century, all the important men wore them: General George Washington, King George III, Catherine the Great, Emperor Napoleon Bonaparte and Captain Ross Poldark. POLDARK? Who is Ross Poldark you ask? Well period drama fans, if you don’t know who that is by now, let me tell you. After viewing the first episode of the new reboot of the eponymous BBC/PBS period drama Poldark you will never be puzzled by who this gentleman is again—only why you waited so long to make his acquaintance. He’s handsome. He’s brooding. He’s rebellious. He’s right there on your television screens for seven Sundays in a row this summer on PBS.

Masterpiece Theatre (now Masterpiece Classic) first introduced us to Cap’n Poldark in their landmark 1975 screen adaptation of author Winston Graham’s best-selling novels. The two-season, 29 episode series was a huge hit on both sides of the pond. Forty years ago English actor Robin Ellis filled those big, black boots. Teenage fan girls mobbed him like he was one of the Beatles. The show made him a star.

This time around the iconic romantic hero nonpareil is played by Irish actor Aidan Turner. Up until this point, he has played the trifecta of on-screen para-normal beings: a vampire (Being Human), a hobbit (The Hobbit) and a werewolf (Mortal Instruments). Could this strikingly handsome actor play the most complex romantic hero to grace our screens since Mr. Darcy, Mr. Rochester or Mr. Thornton? We shall see. 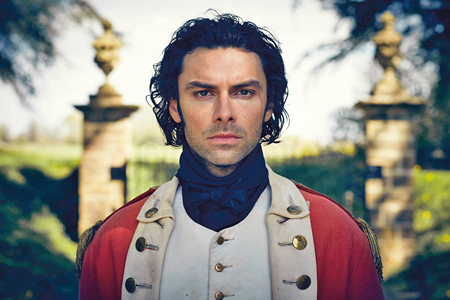 It’s hard to overlook the dominance of Ross Poldark as a compelling hero; however, there are other characters to watch, namely the two heroines who form the love triangle: high-born sophisticated beauty Elizabeth Chynoweth and low-born kitchen maid Demelza Carne. They are complete opposites in many respects which makes for a combustible plot. Rounding off this full-blown, multi-layered, romantic saga adapted by Debbie Horsfield are dysfunctional family members, unscrupulous bankers, ambitious prostitutes, love-lorn spinsters, and down-trodden miners. If there ever could be a replacement for our serious addiction to the dramatic exploits of the Crawleys of Downton Abbey, the Poldarks might give them a run for their money.

BRIEF RECAP (there be spoilers ahead)

Set in 1783 Cornwall, Ross Poldark returns home a wounded veteran after serving his King and Country as a Royal Army officer during the American Revolutionary War. His father has died, his estate is in ruins, and his sweetheart Elizabeth Chynoweth (Heida Reed) is engaged to his cousin Francis Poldark (Kyle Soller).

Though it appears to his Uncle Charles Poldark (Warren Clark) that there is little reason for his nephew to remain, Ross refuses his generous offer to rebuild his life elsewhere—choosing instead to fight for everything that he cares for: his estate, his tenants and the woman who jilted him. With the help of his father’s indolent servants Jud and Prudie Paynter (Philip Davis and Beatie Edney) and a street urchin turned kitchen maid Demelza Carne (Eleanor Tomlinson), Ross is determined to rebuild his pride and his family fortune. However, there are evil forces at work.

After the loss of the war with the colonies, the severely recessed English economy has crippled the Cornish landed gentry, and in turn the local merchants and the villagers. Tin and copper mines are closing and the tenant farmers, miners, and fishermen are starving. The only people to prosper are the powerful Warleggans—ambitious bankers George (Jack Farthing) and his uncle Cary (Pip Torrens). While they lend money, foreclose and scheme takeovers, Ross forges forward against all odds.

“Gambling again Poldark? Tell me again why you enlisted”—army officer

“To escape the gallows, sir.”—Ross Poldark

Episode one starts off with men in redcoats. (We are at attention.) We are also shown Ross Poldark’s rebellious nature—and he’s not shy about it. He’s in a redcoat. He’s gambling. He’s smug. This is definitely not a Jane Austen adaptation.

“Pray do not be reckless. I want you to return.”—Elizabeth Chynoweth

“It won’t be for long.”—Ross Poldark

In a dream sequence, we see Ross and his willowy sweetheart Elizabeth back in Cornwall (in slow motion scenes of course) and learn of their youthful attachment before he departed for America. She teases that he “will forget her.” He replies “Never.” Remember this. Poldarks are like elephants. They forget nothing, and they never forgive.

“I seem to have interrupted a party. Is this in honor of the peace or the next war?” — Ross Poldark

Awkard. Crashing the engagement party of your beloved is tantamount to dancing wildly at your cousin’s wedding after too much champagne. You will never forgive yourself, nor will your family.

“Well pick me liver. What could we do? Left alone with no master to guide us.” — Jud Paynter

There are farm animals living in your parlor and your servants are dead drunk in your bed. After the news of your father’s death and your beloved’s betrayal, things can only get better from here. We agree. “Tedn’t right. Tedn’t fair. Tedn’t fit. Tedn’t friendly.”

“I rather admired him at school. He said what he thought and did what he liked.” — George Warleggan

Ah, George. One of the wile Warleggans. You think you can befriend our hero and use him for your own selfish purposes? How little you know him—and how little he cares what you think. Later you call him impecunious. That is such a big word for such a small-minded man. We shall see who is really impoverished in the end.

“What can he offer you but poverty, uncertainty and a dubious reputation?”—Mrs. Chynoweth

Elizabeth tries to high-tail it away from her fiancé’s house and talk to Ross to explain her reasons for choosing Francis and see if he truly still loves her. Her ambitious mama catches her in her escape and challenges her. My reaction to her questioning her daughter’s intensions was to reply, heck yes. Take poverty, uncertainty and dubious reputation and don’t look back.

“Do you believe that breeding can ever be bought?”—George Warleggan

“You should ask your uncle.”—Ross Poldark

“Ross, I know you are not uninterested in the sport. Perhaps you will instruct me in its finer points.”—Mrs. Chynoweth

“I feel convinced, ma’am, that there are any subtleties of combat on which I can offer you any useful advise.”—Ross Poldark

Double zing. Who said that Winston Graham was not witty?

“There be Garrick, sir. Him and me be friends. Where I go, he goes.”—Demelza

Actor W. C. Field is reputed to have said, “Never work with animals or children.” They steal the limelight. How could Ross possibly have said no to Demelza’s request to bring her dog along with her to Nampara? By putting her dog ahead of herself when she is starving showed him that she could not desert a friend, and neither should he.

Eleanor Tomlinson as Demelza Carne with Garrick, her dog

Sumptuous, invigorating and sexy, this new adaptation by Debbie Horsfield has everything that a period drama fan could possibly desire: swarthy, broody, tousled haired leading man; beautiful, spirited and self-confident leading lady; despicable villains and a supporting cast of likable characters—all set in late eighteenth-century decaying aristocracy. If Jane Austen and Charlotte Bronte met and drank too much port, Poldark would be their literary love child.

However, even though Horsfield has stayed close to author Winston Graham’s original text, I felt like the pacing was too rushed, lines of dialogue truncated to a bare minimum of words and the editing so precise that we could not linger long enough to contemplate its deficiencies. It is hard for me not to compare this screenplay to the original book, or its closest cousin, the 1975-1977 original Poldark television series, but there you have it. Since I have already been exposed to those mediums there is no erasing that experience. For those who have not read the books nor seen the original Poldark series, you may not sympathize with me, and only feel the energy and heat generated by its handsome star, Aidan Turner, and feel no pain.

This first episode sets up the plot with accuracy and expediency. The performances were promising, especially Turner as the mad, bad and dangerous to know Captain Poldark, and Pip Torrens and Jack Farthing as the Warleggans of Slytherin House. Eleanor Tomlinson transformed from a ragged street urchin into a radiant beauty with the alacrity of a fruit fly, but it was not troublesome to the eye.

Poldark continues next Sunday on Masterpiece Classic PBS with episode 2. Join us during the live Twitter event by using the hashtag #PoldarkPBS