Seattle area residents are in for a treat next month when the premiere of “You Are Passionate, Jane” is presented on Mercer Island on Sunday, August 12, 2012 at 2:00 pm by the Jane Austen Society of North America Puget Sound chapter.

Written by Austenesque author Diana Birchall, this light, bright and sparkling diversion imagines what it would be like to be privy to an intimate view of two literary legends in tête-à-tête when they meet in heaven for the first time! Staring author Syrie James as Jane Austen and Diana Birchall as Charlotte Bronte, here is a teaser description by the playwright:

“Jane went to Paradise:  That was only fair,” wrote Rudyard Kipling, and generations of readers have agreed with him.  Now, in “You are Passionate, Jane,” we follow Jane Austen right past the Pearly Gates.  She has been given the important job of Gatekeeper in Heaven, deciding which other literary figures will be allowed to ascend.  A position that has been held by dead white male authors for eons, but at last the most deserving woman novelist gets her turn.  So, when she is not writing one of her new heavenly novels, Jane passes Judgement, and in the fullness of time, the newly deceased Charlotte Bronte is brought before her.  The two women are temperamental opposites, and don’t appreciate each other’s viewpoint in the least.  As Charlotte’s passionate life and works come under scrutiny (the title quote refers to Jane Eyre), the literary sparks fly – upward.

The literary feud between these two famous authors has been long debated. Was Bronte truly devoid of any sympathy to Austen’s style? Here is a bit of backstory on how it all began…

In 1847, literary critic G.H. Lewes suggested in his review of Jane Eyre that Charlotte Bronte might benefit from writing less melodramatically, offering up Jane Austen as example and inspiration. Bronte’s strong response to Lewes’ admiration of Miss Austen has raised many eyebrows in literary circles over the centuries.

Why do you like Miss Austen so very much? I am puzzled on that point. What induced you to say you would rather have written “Pride and Prejudice” or “Tom Jones’” than any of the Waverly Novels? I had not seen “Pride and Prejudice” till I read that sentence of yours, and then I got the book and studied it. And what did I find? An accurate daguerrotyped portrait of a common-place face; a carefully-fenced, highly cultivated garden with near borders and delicate flowers- but no glance of a bright vivid physiognomy- no open country- no fresh air- no blue hill- no bonny beck. I should hardly like to live with her ladies and gentlemen in their elegant but confined houses. These observations will probably irritate you, but I shall run the risk. – Charlotte Bronte in a letter to G.H. Lewes, 12 January 1848

As “passionate” as Bronte was about her style in writing Jane Eyre, Austen is in turn, stoic and elegantly understated in her Pride and Prejudice. Two entirely different approaches; but both masterpieces of world literature. Imagine if you will, these two authors meeting and broaching this sensitive ground? It should be a very interesting and entertaining meeting. 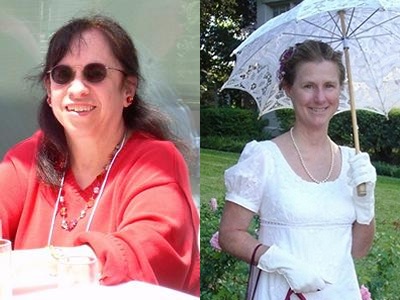 Diana Birchall, who wrote “You are Passionate, Jane,” is a story analyst who reads novels for Warner Bros Studios.  She is the author of the Jane Austen-related novels Mrs. Darcy’s Dilemma and Mrs. Elton in America, and also a scholarly biography of her grandmother, Onoto Watanna, the first Asian American novelist. Her story “Jane Austen’s Cat” appears in the Random House anthology Jane Austen Made Me Do It, and her Austen-related plays have had readings around the country and in Canada.  She has given many talks on Jane Austen, at such venues as Yale, Oxford, and the Chawton House Library in England.

Syrie James, hailed by Los Angeles Magazine as “the queen of nineteenth century re-imaginings,” is an admitted Anglophile who loves All Things Austen.  She is the bestselling author of five critically acclaimed novels: The Lost Memoirs of Jane Austen (Best First Novel, Library Journal); The Secret Diaries of Charlotte Brontë (2011 Audie Romance Award; Great Group Read, Women’s National Book Association); Nocturne (Best Book of 2011, The Romance Reviews, Suspense Magazine, and Austenesque Reviews); Dracula, My Love; and Forbidden, a YA paranormal romance that she co-wrote with her son, Ryan M. James. Syrie’s books have been translated into 16 foreign languages.  Her short story leads the anthology Jane Austen Made Me Do It.  A lifetime member of JASNA, RWA, and WGA, Syrie’s next novel, The Missing Manuscript of Jane Austen—the romantic story of a woman who discovers a previously unknown Austen novel—will be published by Berkley/Penguin Books in January 2013.  Visit Syrie on Facebook, Twitter, and at syriejames.com.

Please join the JASNA Puget Sound chapter for this exciting and humorous event. The meeting is free, our guest speakers will kindly sign pre-purchased copies of their books, and participants will have the opportunity to buy raffle tickets for Austen-related merchandise.

RSVP to regional@austenps.com for location in Mercer Island. I will be in attendance with bells on. Hope to see you there!

10 thoughts on ““You Are Passionate, Jane”, a New Playlet by Diana Birchall to Premiere in Seattle”