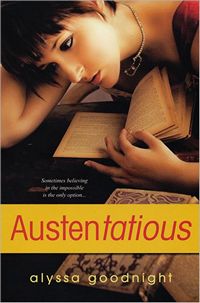 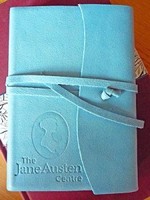 It seemed Jane herself had had my idea first: to offer life advice through a journal–although it’s unlikely her efforts were of the magical variety.  Suddenly, my magical journal became this historical journal, and its connection to Jane Austen was complete!   Once this Magical Jane Austen Draft was completed, I curiously examined the characters in my novel against Jane Austen’s Pride and Prejudice ensemble.  The similarities are few, but they are there.  Given that I adore the spunk of Elizabeth Bennet, a bit of her personality likely slipped into the characterization of Nicola.  And Darcy…dreamy, mysterious, seemingly unattainable Darcy is likely to have influenced the creation of Sean.  Then there is the pride and prejudice keeping them apart…  I assure you, that bit was not done consciously.  The other characters bear virtually no resemblance to the cast of Pride and Prejudice–at least not that I can see.  But Jane Austen herself is a character in Austentatious, and I think that is even more fun.

The magical journal in Austentatious works as follows:  the owner records her most private thoughts, her questions and ponderings, her secrets.  Much like any journal.  But then, when she’s stepped away, a bit of magic happens.  ‘Fairy Jane’ then edits down the entry, magically erasing words, until a select few remain.  Read together, in order, these remaining words form a message and offer advice to the journal owner.  Whether she wants to take it or not is an entirely up to her.  Or is it…?  You must read the book to find out!

I may not have set out to write an “Austen novel,” but I confess to being completely caught up in the magic that is Jane.  Adding quotes from her novels and imagining how she might advise a twenty-first century woman reminded me how much I loved her collected works, and compelled me to capture a bit of that sensibility in this novel.    I love that Jane has developed a sort of mind-boggling cult following.  Much the same way that classic movies are colorized and digitized and infused with high definition sound (and favorite movies are remade) for a new generation of viewers, so too are Austen’s classic novels adapted, modernized, and reimagined.  We want the essence of the original–which we adore–but with a fresh new spin.  And how much weirder can you get than imagining literary darling Jane Austen in Austin, Texas?  My intention with Austentatious was to create a situation in which a modern day woman was given an opportunity to step into an Austen storyline… (I suspect it isn’t entirely uncommon to imagine oneself cast opposite Mr. Darcy…)  and have her happy ending.

I wouldn’t categorize Austentatious as a retelling, spin-off, or modernization so much as an homage to Ms. Austen.  I hope my efforts do not disappoint.

Much like the heroine of Austentatious, Alyssa Goodnight has lived in Austin, Texas, graduated from the University of Texas at Austin, worked in the semiconductor industry, and experienced the Weird. She has not owned a magical journal or ever bandied words with the spirit of Jane Austen. She would positively relish the opportunity. Alyssa currently lives between Houston and Galveston with her husband, two sons, and their adventure dog, Indiana Jones. She does her writing with an ice-cold can of Dr. Pepper and her reading with cake whenever possible. She is dutifully working on her next novel while dreaming of the day that she finds herself conscripted into a flash mob dance. Alyssa’s first novel, Unladylike Pursuits, was termed ‘irresistible’ by Booklist. Vist Alyssa at her website: Alyssa Goodnight; Facebook: Alyssa Goodnight; Twitter: @a_goodnight.

Enter a chance to win one of three copies of Austentatious, by Alyssa Goodnight by leaving a comment stating what life advice you need today from Jane Austen (or the Jane Austen of Alyssa’s imagination), or ask Alyssa a question about her creative writing process, by 11:59 PT, Wednesday, February 15, 2012. Winners announced on Thursday, February 16, 2012. Shipment to US and Canadian addresses only. Good luck!