Please join us today in welcoming author Carrie Bebris during her blog tour in celebration of the release of The Deception at Lyme (Or, The Peril of Persuasion), the sixth book in her Mr. & Mrs. Darcy Mystery series released today by Tor Books.

Laurel Ann, thank you so much for inviting me here to talk about my new Mr. & Mrs. Darcy Mystery, The Deception at Lyme (Or, The Peril of Persuasion) on its release day. It is always such a pleasure to visit Austenprose and enjoy, as Anne Elliot would say, the good company of “clever, well-informed people, who have a great deal of conversation.”

Ever since my series debuted in 2004 with Pride and Prescience, readers have been asking for a Mr. & Mrs. Darcy Mystery based on Persuasion, and I indeed planned to write one. Persuasion competes with Pride & Prejudice as my favorite Austen work (the winner is generally determined by whichever one I happen to be reading at the time), and the opportunity to bring together Mr. Darcy and Captain Wentworth in the same novel—well, let’s just say that the idea of spending every day with the two of them for the year or so it takes me to write a book was very appealing indeed!

However, whenever I begin writing a new novel, I look at where Darcy, Elizabeth, and other characters were left (both physically and in terms of personal growth) at the end of the previous books of the series. I contemplate which of Austen’s characters they might naturally encounter next, without the meeting feeling forced or coincidental. And I reread Austen’s novels with an eye toward loose threads that, with a little tugging, can be woven into a web of intrigue that entangles the Darcys whether they want to be involved or not.

Before now, both my own intuition and the Darcys themselves told me the timing wasn’t right for a Persuasion-based Mr. & Mrs. Darcy Mystery. The Darcys weren’t ready to meet the Wentworths yet, and I wasn’t ready to introduce them. Austen’s “light, and bright, and sparkling” P&P was written early in her career; Persuasion was written at the very end and has a different tone. It is the work of a more mature writer, the story of a more mature hero and heroine. Before entering that world, the Darcys needed to have other adventures first, needed to gain more life experience. And I needed to develop a story worthy of bringing Elizabeth Bennet, Mr. Darcy, Anne Elliot, and Captain Wentworth—Austen’s most popular and compelling pairs of heroes and heroines—together. A mystery that only these four individuals, working collectively, could solve.

Now, as the Darcys enter their sixth adventure, the time is finally right. And that story is The Deception at Lyme.

It is a mystery that will take readers from the cliffs of Lyme to a battle at sea, as the Darcys and Wentworths investigate not one suspicious death, but two. Austen left me a number of loose threads and possibilities to work with. I was particularly inspired by the Cobb itself: After Louisa Musgrove’s fall, what mystery writer could resist sending another victim tumbling off the seawall—perhaps not so accidentally—for the Darcys to discover? The clandestine meeting that Mary Musgrove observes in Bath between Mrs. Clay and Mr. Elliot provided still more strands to weave into the story. What were those two scoundrels really discussing?

I also incorporated a loose thread I myself had left in a previous Darcy Mystery. In North by Northanger, I had created and killed a character in a single sentence (I must have been having a good writing day!) by stating that Darcy’s cousin Colonel Fitzwilliam had a younger brother, a naval officer who had died at sea. What if Darcy found cause to question whether his youngest cousin had truly died in action—and needed Wentworth’s help to uncover the truth? That casual mention provided a reason for Mr. Darcy and Captain Wentworth to ally.

In the course of their investigations, the Darcys meet all of your favorite characters from Persuasion—the Elliots, the Crofts, the Harvilles, the Musgroves, even poor Mrs. Smith. Mr. Darcy’s sister, Georgiana, also has a significant role in this novel. For years, readers have been asking me when Georgiana would enjoy a romance of her own, but a worthy enough gentleman never presented himself before. Now she finds herself with two suitors—an enigmatic naval officer and a handsome young baronet—while also finding that the course of true love never does run smooth. At least, not for an Austen heroine! 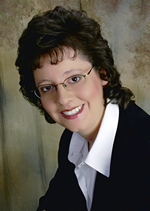 Carrie Bebris is the author of the award-winning Mr. & Mrs. Darcy Mysteries, in which the married Mr. Darcy and Elizabeth become embroiled in intrigues involving other Jane Austen characters. Reviewers praise her novels for capturing not only the spirit of Austen’s works but also the historical details of the era. The Royal Navy figures prominently in the Darcys latest adventure, The Deception at Lyme (Or, The Peril of Persuasion), a book whose extensive research took her from the top of the Cobb to the hold of the 18th-century warship HMS Victory.

Carrie also writes for Jane Austen’s Regency World magazine and other publications and has edited nonfiction books about Austen and Shakespeare. She holds an M.A. in English literature and is a life member of the Jane Austen Society of North America. When not writing, she likes to travel, watch costume dramas that send her husband fleeing the house, and indulge in her love of all things British. Visit Carrie at her website, Carrie Bebris.

Enter a chance to win one of three copies of The Deception at Lyme (Or, The Peril of Persuasion), or, one lucky winner will receive one complete set of the Mr. & Mrs. Darcy Mysteries. Yes, that is all six novels – Pride and Prescience (2004), Suspense and Sensibility (2005), North by Northanger (2006), The Matters at Mansfield (2008), The Intrigue at Highbury (2010), and The Deception at Lyme (2011), by leaving a comment stating what intrigues you about reading Carrie’s new Persuasion-inspired murder mystery, or which characters from Austen’s original novel you think might meet their demise in this new Mr. & Mrs. Darcy adventure by midnight PT, Wednesday, October 5th, 2011. The winners will be announced on Thursday, October 6th, 2010. Shipment to US and Canadian addresses only. Good luck!

78 thoughts on “The Deception at Lyme (Or, The Peril of Persuasion) Blog Tour with author Carrie Bebris & Giveaway”