today in welcoming Austenesque author Mary Simonsen for the official launch of her book blog tour of A Wife for Mr. Darcy, a new Pride and Prejudice-inspired novel that was released on July 1, 2011, by Sourcebooks.

A GENTLEMAN should always render an APOLOGY

When Mr. Darcy realizes he insulted Miss Elizabeth Bennet at the Meryton Assembly, he feels duty bound to seek her out and apologize…

When he has INSULTED a LADY

But instead of meekly accepting his apology, Elizabeth stands up to him, and Darcy realizes with a shock that she is a very different type of lady than he is used to…

Darcy is more intrigued than he’s ever been by any young lady, but he’s already entangled in a courtship. It’s a brutal predicament for a man of honor who only longs to follow his heart…

I am so pleased to be back at Austenprose to kick off my blog tour for my latest novel. Thank you, Laurel Ann, for hosting me. It’s always a pleasure.

You asked that I write about my inspiration for my new novel, A Wife for Mr. Darcy. That’s easy: Elizabeth Bennet. Since I first read Pride and Prejudice when I was 17 (that’s a few decades ago), I have loved the character of Lizzy Bennet, probably because she was the antithesis of me. Lizzy had spunk; I admired spunk. Lizzy was willing to refuse an offer of marriage from a handsome, well-to-do man of rank and privilege because he exhibited a “selfish disdain for the feelings of others” and because he had injured her sister. In an era, when a woman faced a life of privation and pity if she did not find a husband, refusing such an offer took real courage. On the other hand, I usually played it safe, except for that time I went to Greenwich Village in New York City without telling my mother. (Long story short: I got caught.) If Mr. Darcy had asked me to marry him, I would have accepted him, keeping my fingers crossed that I could mold the man to my liking. However, if things didn’t go as planned, I could always mope about in one of Pemberley’s exquisitely decorated rooms or go sulk in the gardens.

When I write about Lizzy, I always portray her as someone who knows her own mind, but I also try to be true to the times in which Elizabeth Bennet lived. In A Wife for Mr. Darcy, Darcy realizes that he was rude to Elizabeth at the Netherfield ball and goes to Longbourn the next day for the purpose of apologizing, thus setting their relationship on a different trajectory. But there are difficulties. (Of course, there are difficulties.) During the season, Darcy paid sufficient attention to a Miss Letitia Montford to get the gossip mills going. Because there are expectations of an offer of marriage to Miss Montford, Darcy must tread carefully or risk injuring the lady. Both Lizzy and Darcy must navigate a minefield of societal norms in order to come together.

I think another reason that I have always been attracted to Lizzy Bennet is because she belongs to a family of five daughters. I was the fourth daughter in the family of six girls. Jane Austen did an excellent job in mixing up the personality traits of the five Bennet daughters. In my family, there was definitely an Elizabeth, Jane, and Lydia. When I was in my teens, I was most like Mary Bennet: quiet, bookish, and someone who frequently said stupid things. But as I gained confidence (especially after my marriage to a wonderful man), I became more like Elizabeth Bennet. I gained enough confidence to write and publish novels and to put them out there for other people to comment on just as Jane Austen did nearly 200 years ago. In doing so, I exhibited another of Elizabeth Bennet’s qualities: courage.

Do you find the character of Elizabeth Bennet to be inspirational? I’d love to hear from you. Thanks for reading my post. 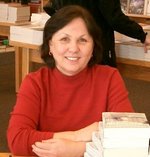 Mary Lydon Simonsen’s novels, Searching for Pemberley and The Perfect Bride for Mr. Darcy, were acclaimed by Publishers Weekly, RT Book Reviews, and Booklist. She is well loved and widely followed on all the Jane Austen fan fiction sites with tens of thousands of hits and hundreds of reviews whenever she posts. She has also self-published a parody of Persuasion, Anne Elliot, A New Beginning, two Austen novellas, Mr. Darcy’s Angel of Mercy and For All the Wrong Reasons, and a modern romance, The Second Date, Love Italian-American Style. Mary lives in Peoria, Arizona where she is currently working on her next Jane Austen novel. Visit Mary at her blog, on Facebook and as @bibliofilly on Twitter.

72 thoughts on “A Wife for Mr. Darcy Blog Tour with Author Mary Simonsen”