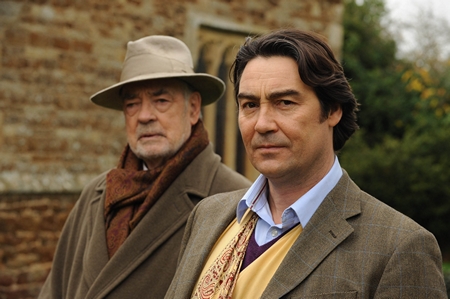 Inspector Lewis continues tonight on Masterpiece Mystery with another new episode of the popular detective series based in Oxford where the death toll since its predecessor Inspector Morse hit the airwaves in 1987 must place this small college town as the epicenter of “malice aforethought” in England. The Dead of Winter involves sad connections to the past, lost treasure and sordid family secrets — all prime motives for murder. This new (to the US) episode guest stars an array of former Austen movie adaptation actors that many Janeites will recognize and reveals some personal insight into the past of Inspector Lewis’ (Kevin Whatley) dishy young Sergeant James Hathaway (Laurence Fox). It is a complete turn-around in comedic tone to last week’s Counter Culture Blues’ take on Lewis in a psychedelic rock and roll haze. Here is the PBS synopsis:

An Oxford academic is dead on a tour bus and none of the other passengers even took notice. The curious case leads back to Crevecoeur Hall, a vast, history-rich Oxford estate, and as it happens, the setting for much of Detective Sergeant Hathaway’s (Laurence Fox) youth. Hathaway reconnects with his past — and Scarlett Mortmaigne, the daughter of the estate’s owner. But is he also consorting with a main suspect? It’s a case that threatens to expose the shortcomings and secrets of a wealthy family, cloud Hathaway’s judgment and ultimately put his relationship with Detective Inspector Lewis (Kevin Whately) in jeopardy. Nathaniel Parker (The Inspector Lynley Mysteries) guest stars.

This episode was centered around enigmatic Sergeant James Hathaway, Lewis’ smart, stoic and sarcastic young partner. Over the past three seasons we have seen his instincts sharpen, his skills honed and his confidence build from his professional relationship with his governor. In The Dead of Winter he takes the forefront in the investigation and I am pleased to see he is finally being given more than walking one step behind Lewis or looking over his shoulder while he interviews suspects. His character is by far the most interesting of the regulars in the series. We know very little about him other than he attended Cambridge, once trained as a priest and does not date. Occasionally a script will throw a female in his path, but if a hardened career crow and a transsexual psychopath are the kind of relationships he has encountered, no wonder he is celibate.

This time round Hathaway is given another opportunity to hang up his virtual clerical collar when he reconnects with Scarlett Mortmain (Camilla Arfwedson – Miss Marple: Murder is Easy), a beautiful aristocrat who he grew up with at Crevecoeur Hall (crëvecoeur is French for heartbreak), a grand country estate near Oxford that his father managed for the Mortmaigne family twenty years ago. When he arrives on the scene to investigate the possible murder of Professor Black, you can see his apprehension and project where this story will go. There is a painful history here, and if you pay attention, much will be revealed beneath the dialogue and his reactions.

There appears to be additional personal secrets being harbored by others too. The Marquise of Tygon, the elderly patriarch Augustus Mortmaigne’s (Richard Johnson – Mr. Wickham, Pride and Prejudice 1952) bank has just gone belly up and his daughter Scarlett is being used as quid pro quo to refill the family coffers by marrying a Lebanese millionaire Tarek Shimali (Richard Saade). The Marquise’s much younger wife Selina (Juliet Aubrey – Middlemarch) who he married when she was seventeen is having an affair with his nephew Philip Coleman (Nathaniel Parker – Vanity Fair) and his young son and heir Titus (Jonathan Bailey) is dallying with a servant Briony Grahame (Georgia Groome). Orchestrating this upstairs downstairs tango is the vacant stuttering butler Paul Hopkiss (Pip Carter) who also was a playmate of Scarlett and Hathaway in what he terms “happy days”.

When a bloody candlestick discovered by Hathaway in the Crevecoeur Hall family chapel is matched to Dr. Black, Lewis and Hathaway suspect the priest Father Jasper Hugh O’Conor (James Morland – Northanger Abbey 2007) when they unearth his tragic connection to the victim. Shortly after another death is linked to the case when the present estate manager Ralph Grahame (Jonty Stephens) is found dead by gunshot and a murder-suicide is suspected. After Lewis reveals his belief that the real motive to murder was a fifteenth century royal treasure on the estate, Hathaway thinks his boss has lost it.  He can’t understand why Lewis won’t accept that Grahame killed Dr. Black for running off with his wife. Lewis can’t accept why Hathaway seems to be protecting the Mortmaignes.

Even though I dearly love to laugh, when it comes to murder mysteries a serious tone with an occasional laugh is so much more satisfying. This new episode written by Russell Lewis supplied a finely crafted whodunit to fire up the gray matter, keep track of the body count and soak in that glorious Oxford backdrop. The guest cast was really outstanding. Nathaniel Parker is always a joy to watch and Guy Henry, who was an unforgettable Mr. Collins in Lost in Austen, added interest to a minor role as Professor Pelham. While Hathaway was getting smashed and lip worked by that chit Scarlett, Lewis had his own flirtation with Dr. Black’s fellow professor Frances Woodville (Stella Gonet – Mrs Musgrove in Persuasion 2007). She sparkled and he blushed. Too cute! We also got a glimpse of Lewis’ compassionate side when he befriended the murder victim’s cat and named it Monty. Ahh. I also thought it humorous that the writer  played with us in his choice of names and murder weapons. Was it Lady Scarlett in the chapel with a candlestick? I won’t tell.

Scarlett: “I thought for a moment you’d chased after me to declare your undying love.”

Hathaway: “I’m not sure men do that nowadays, do they?”

Scarlett: “Perhaps they should.”

INTO my heart on air that kills

What are those blue remembered hills,

What spires, what farms are those?

I see it shining plain,

The happy highways where I went

91 thoughts on “Inspector Lewis: The Dead of Winter on Masterpiece Mystery PBS – A Recap & Review”