Our party to Ashe to-morrow night will consist of Edward Cooper, James (for a Ball is nothing without him), Buller, who is now staying with us – I look forward with great impatience to it, as I rather expect to receive an offer from my friend in the course of the evening. I shall refuse him, however, unless he promises to give away his white Coat.  – Jane Austen, 14 January 1796 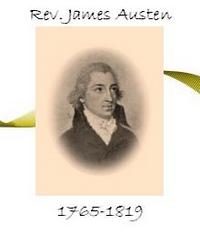 In January of 1796, Jane Austen was just twenty years old and as this quote from a letter to her elder sister Cassandra implies, her head was full of dancing at a Ball and flirting with Tom Lefroy, the friend that she hoped to receive an offer of marriage from. As many students of Jane Austen’s life and viewers of the popular movie Becoming Jane know this famous and much debated flirtation with her “Irish friend” would not result in a marriage, but only in a separation of the couple by their families. Money over-ruled love in Regency society and unfortunately, neither Jane nor Tom had any. Interestingly, Jane’s eldest brother James Austen was also in attendance at the Ball and on the hunt for a new wife after the sudden death of his first in 1795. The fact that Jane mentions that a Ball would be nothing without him is quite amusing considering he was a widower and ten years her senior. Ironically, she would later write about a married man not dancing at a Ball in her novel Emma, when the newly wed Mr. Elton declines to dance at the Crown Inn claiming to be “rather an old married man, and that my dancing days are over.” In Jane’s eye, her brother James was neither old nor beyond dancing. This small reference is a big insight into his character and her respect of him.

James Austen was the first child born to Rev. George Austen and his wife Cassandra on 13 February 1765 at the Deane parsonage in Hampshire where the couple resided from 1764-68 before moving into the rectory at Steventon. James was Jane Austen’s eldest brother, his mother’s favorite, and his father’s heir. Described by Austen biographer George Holbert Tucker as “an unequal blending of sociability and brooding melancholy, the later predominating as he grew older,” James was sophisticated, creative, and ambitious; undoubtedly influencing his younger sister’s life. A gentle and studious boy, his parent’s intended for him to follow in his father’s footsteps and become an Anglican minister. At age fourteen he was sent to his father’s alma mater St. John’s College at Oxford. During visits home to Steventon, he organized family amateur theatricals presenting them in the parlor and barn, including writing epilogues to the productions and recruiting his family, neighborhood children, and family friends to perform all the parts. It is believed Jane’s early involvement in these plays influenced her inclusion of a family theatrical in her novel Mansfield Park.

From an early age James excelled as a writer and poet, and even after his sister’s success as an author, he was always considered the most talented writer in the family.

His seniority, his sex and his choice of the art of poetry over prose meant that even after his sister had become a highly praised novelist, he was still in all important respects still regarded as the writer of the family. Claire Harman

In 1786 he embarked on the Grand Tour of the Continent visiting Spain, Holland and his cousin Eliza de Feuillide’s estate in Guienne, France. After his return home he took Holy Orders and was ordained a deacon at St. David’s Cathedral in Pembrokeshire on 19 December 1787. While serving as curate for Stoke Charity in Hampshire, he made a bold move into the world of  publishing by creating with his brother Henry a weekly literary periodical The Loiterer. Intended to showcase his writing talents, it was targeted for Oxford college students but his ambition soon saw distribution extended to London by Jane Austen’s future publisher Thomas Egerton. The periodical ran a little over a year from 1789-90. It is now remembered more for one famous letter published in issue No 9 which is suspected to have been penned by a teenage Jane Austen under the nom de plume Sophia Sentiment. Sadly, The Loiterer closed because his publishing bills outweighed his subscriber’s payments. Disappointed in its closure, James would never attempt to publish anything again in his lifetime.

He continued his clerical life in 1789 as the curate of Overton in Hampshire, the nearest little town next to his father’s parish at Steventon. In this youth, James had been quite athletic and passionate about riding to hounds. While living in Overton he joined the Kempshot pack and had the honor of foxhunting with the Prince of Wales (later Prince Regent and George IV). One of the local families living at the Old Manor House at Laverstoke was the retired General Edward Mathew. Recently returned from the West Indies, the general had served bravely in the British Army with the Coldstream Guards in Europe, through the American War of Independence, and as the Governor of Grenada his last ten years in service. A bit of a tyrant, it is believed that General Mathew was the inspiration for Jane Austen’s character of General Tilney in Northanger Abbey. Undeterred, James courted his daughter Anne who at age thirty was considered a spinster.

Anne Mathew must have seen in James Austen her last chance of matrimony, and he had a weakness for elegant, aristocratic young women. Deirdre Le Faye

They were married 27 March 1792 at Laverstoke in a ceremony performed by his father Rev. Austen. The newlyweds lived at Deane parsonage on a joint income from Anne’s generous father and James’ clerical pay of £300 a year. James kept a pack of harriers (hunting hounds) and Anne an open carriage. Their expenditures quickly outstripped their income. To help the couple Anne’s father purchased the chaplaincy of the 86th Regiment of Foot in 1793 for his son-in-law. Even though the Napoleonic Wars were raging, James gladly accepted the new position and the increase in income, never expecting to go abroad to serve. The couple had one daughter, Jane Anna Elizabeth, born in 1793. Anne died quite unexpectantly on the 3rd May 1795.

By 1796, James was out of mourning and dancing at a Ball at Ashe with his sister Jane and cousin Edward Cooper. A widow with a young child, James quickly turned his attentions to finding another wife. Who better than his cousin the enchanting Eliza de Feuillide, now a widow from the Revolution in France. He courted and proposed, but soon tired of being left dangling by her indecision, moving on to another family friend Mary Lloyd sister of Jane’s devoted friend Martha. They married in 1797 and had two children. Son James Edward was born in 1798 and would later in life become Jane’s first family biographer, and one daughter Caroline Mary Craven born in 1805.

In 1801 Jane’s father decided to retire to Bath and put his eldest son James into Steventon as curate and rectory locum tenens. The family story goes that when Jane was informed that she and Cassandra would be moving to Bath with her parent’s she fainted from shock. Like her brother James, she enjoyed country life and the society of her family and friends. James would not only now reside in her family home but be officiating over her father’s parish. Besides the abrupt change in Jane’s life, her parent’s would also sell most of their belongings including Mr. Austen’s extensive library and her beloved pianoforte. James’ wife Mary did not make the transition any smoother. Not known for her tact or diplomacy she had never been a favorite of the family. Overeager to move into her new residence, she firmly pushed them along. After the death of Mr. Austen in 1805, James would become rector and continue at Steventon for the rest of his life. A dutiful son, James was the first of Mrs. Austen’s children to offer £50 in financial assistance to support her and his two sisters after his father’s death.

James valued the solitude of the country and hated to be confined indoors. He and his wife Mary seemed to be opposite personalities. He was a scholar happy in his library or a walk in the woods. She had no patience with books or reading, fretted over finances, and was always the first to be slighted by other’s behavior. When Jane, Cassandra and her mother later moved to Southampton, James and his family often visited them there when they could. After one of their holiday get-togethers Jane noticed a change in her brother. “The company of so good & clever a man ought to be gratifying in itself; but his Chat seems all forced, his Opinions on many points too much copied from his wife.”  The gentle poet and talented writer she had known in her elder brother seemed to be gone.

Having suffered for years from digestive trouble, James was too ill to attend Jane’s funeral at Winchester Cathedral in 1817. In honor of his sister he took up his pen and composed in a poem in her memory. Shortly after he followed her in death succumbing on December 13th, 1819. He was only 54 years old. He is buried at the churchyard of St. Nicholas in Steventon. A plaque in honor of his service hangs in the church.

After his death, his mother would assess that he excelled at “Classical Knowledge, Literary Taste, and the power of Elegant Composition” in the highest degree, but not at business. Mrs. Austen obviously valued pewter over the pen.

Gentle Reader: In honor of JASNA’s annual meeting in Philadelphia this week, this blog, Jane Austen’s World, and Jane Austen Today will be devoting posts to Jane Austen and her siblings. Look for new links each day.