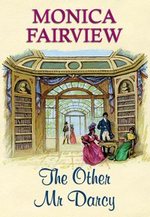 The Other Mr. Darcy is a new Pride and Prejudice sequel with a unique premise. Spotlight Caroline Bingley, a minor character who we all loved to hate in the original novel, and somehow make her into a likeable heroine. Impossible you say! And so it would seem. Jealous, manipulative and scheming, her negative attributes heavily outweighed any of her finer qualities (honestly, none come to mind), presenting an incredible challenge for any sequel writer. Add into the mix Robert Darcy, the unconventional American cousin of Mr. Darcy, and you have an intriguing concept. This will be either a complete bus accident, or a delightful ride in the park. Let’s hope author Monica Fairview’s fairy godmother mojo is stronger than Caroline’s predilection to snark.

Deeply mortified by Mr. Darcy’s marriage to Elizabeth Bennet, Caroline Bingley uncharacteristically breaks down on the day of the wedding ceremony. Distraught and sobbing, her emotional outburst is witnessed by Robert Darcy, Mr. Darcy’s American cousin. Shocked and embarrassed to be seen in such a state, their first meeting gets off to a very bad start. A year and a half later, Caroline is living with her brother Charles Bingley and his wife Jane at Netherfield Park. Also residing with the Bingley’s is her sister Mrs. Hurst, now a widow. When Robert Darcy arrives unannounced from Pemberley bearing urgent news for the Bingley’s, Caroline is horrified to see him again. Will he keep her secret, or use it against her? Jane is needed immediately by her sister Elizabeth prompting the Bingley’s to depart for Pemberley post haste, leaving Robert Darcy to escort the ladies to Derbyshire. Joining them from London is Colonel Fitzwilliam, Mr. Darcy’s cousin, and a Bingley family friend. Along the road, travel complications delay their journey in Nottingham, and they take refuge at the estate of the Lough’s, Colonel Fitzwilliam’s friends.

While there, Caroline will receive two surprising marriage proposals. The first is from Colonel Fitzwilliam. Suspecting that he is motivated by her fortune, she delays her decision. The next morning guests begin congratulating her on her betrothal, but not to Colonel Fitzwilliam; to the wealthy and distinguished Sir Cecil Rynes, sending her into a panic. This blunder will ruin her chances with the one man she truly aspires to marry. Whoever started this rumor has forced Sir Rynes’ hand to deny the betrothal, humilating Caroline. She must either acknowledge the engagement immediately or refute it. Resolved to announce the mistake, she is interrupted by her friend Mr. Olmstead who steps in with his own solution declaring that Caroline is indeed engaged – to Robert Darcy! Caroline is dumbfounded and numb with shock. Mr. Darcy has gallantly agreed to save her honor. The proper Caroline has no choice but to temporarily play along with the scheme to save her own reputation.

Monica Fairview is a skilled storyteller, the narrative well paced and engaging. I admired her creative ability to craft characters from Austen’s plot, move them in new directions, and introduce new characters that framed the scenes and enhanced the story. I found her style to be fairly modern, with little embellishment of the text with early nineteenth-century language or idioms. There are, however, brief allusions to passages and language from Pride and Prejudice that astute Janeites will recognize. The highlight of the novel were the brisk repartees between Caroline Bingley and Robert Darcy as sparks flew over their opposition to what each believed was right and wrong. This prompted plenty of misconceptions, misunderstanding and resolutions. This Mr. Darcy is an American with more relaxed social attitudes. Caroline on the other hand, holds on to her social strictures as long as she can, only gradually realizing that they are influencing her attitudes and judgments, ultimately keeping her from her own happiness.

So how did author Monica Fairview turn Caroline Bingley the perfect archetype of a malicious “mean girl” into a heroine that we can admire and root for? Very gradually. The snobby and gossipy Caroline that we remember is never there as strongly as Austen presented her. Most of the snide and spiteful comments are generated by her sister Louisa, making the reader believe that she was the inspiration of Caroline’s bad behavior to begin with. This Caroline has evolved, correcting her sister, and opposing her slights. I did not object to her change in attitude, however, I think it would have been a tad more interesting if Caroline was that “mean girl” at the beginning, and grew away from it with new experiences. Despite this small quibble, I commend Monica Fairview for waving her magic wand and cleverly transforming Caroline Bingley into a human being worth knowing!

13 thoughts on “The Other Mr. Darcy, by Monica Fairview – A Review”