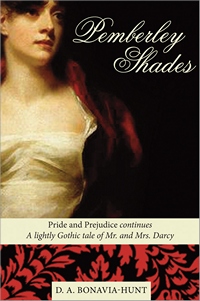 It is with great pleasure that I learned that the classic Pride and Prejudice sequel, Pemberley Shades by Dorothy Alice Bonavia-Hunt, would be re-issued in September by Sourcebooks. Originally published in 1949, it was the second Jane Austen sequel ever to be written and not easily available for purchase unless you were lucky enough to find a small boutique publisher’s edition or a second-hand copy offered at outrageous prices for a first edition. Having existed as the ultimate mysterious and allusive Austen sequel for many years, the wait is now over and the enjoyment can begin. However, what the heck are Pemberley Shades?

My educated hunch is that it refers to his passage in Pride and Prejudice when Lady Catherine de Bourgh is interrogating the heroine Elizabeth Bennet in chapter 56.

“Heaven and earth — of what are you thinking? Are the shades of Pemberley to be thus polluted?”

As a novice reader I didn’t quite understand Lady Catherine’s reference to the shades of Pemberley. In ancient Roman times, shades were referred to as dead relatives. Lady Catherine’s use of the word refers to Mr. Darcy’s illustrious ancestors whose memory would be tainted by the association with the Bennet family who were recently humiliated by the infamous elopement of its youngest daughter Lydia. Taken in context, author D.A. Bonavia-Hunt knew exactly what Austen was implying and used it as a clever play on words for the title of her novel. And what a perfect match it is to the tone of her book which has an underlying thread of hidden life stories, family honor and dis-honor throughout.

Pemberley Shades is true to Austen’s style in that it begins with a significant life change and ends with a marriage. It has been four years since Elizabeth Bennet and Fitzwilliam Darcy married and their pastoral life at Pemberley with their young son Richard is close to perfect until the death of the parish minister sets a course of peculiar events into play that recall a plot in one of the Gothic novels so popular during Austen’s life.

“Who could have foretold that Dr, Robinson, who had done nothing of note in all his lifetime should, by the common and natural act of dying, set in motion a train of events so strange, so startling, so far removed from probability, as to emulate the riotous fancies of a disordered mind?”

Eager to fill the vacancy, Darcy advertises for the position of Rector of Pemberley determined to find a better man to lead the parish. Among the many applicants is one from his wife’s cousin (yes the odious one himself) Rev. Mr. Collins, anxious for a new situation away from Hunsford since he has fallen out with his benefactress Lady Catherine de Bourgh. “I fear to mention that I have lost that unqualified approbation with which your aunt, Lady Catherine de Bourgh, was wont to distinguish me.” Lady Catherine believes that he had a hand in promoting the marriage of his cousin Elizabeth and Mr. Darcy. Knowing that a life of sermons by Mr. Collins would be Purgatory, Mr. Darcy is pressed for a reason to put him off and invites applicant Rev. Mr. Steven Acworth who is also the brother of school friend to Pemberley for an extended stay to see if it is a good match. Mr. Acworth is recently widowed and according to his brother deeply affected by the loss. It does not take long for everyone including Mrs. Darcy to doubt his suitability for the position. His behavior is perplexing. One moment he is all charm and affability, the next dark and morose. This disturbs Elizabeth and Darcy who conclude that he would not suit as Rector, but are compelled to keep him on as a house guest as a favor to his brother.

The majority of the plot line revolves around Georgiana Darcy, Mr. Darcy’s younger sister age 20, single and residing at Pemberley. Now a proficient musician on the pianoforte, Elizabeth and Darcy are concerned that her intensity verges on eccentricity, making her dreamy and unsocial. They think it is time she should marry. Three suitors are interested; Rev. Mr. Mortimer the second son of a local gentry who are in financial decline for several generations, Major Francis Wakeford age 32, a wounded war veteran and cousin to Mr. Darcy with no bright prospects of wealth or position, and the creepy Rev. Mr. Acworth who shares a passion for music with Georgiana and a mysterious hold over her. Not a very promising selection for the heiress of Pemberley with a £30,000 dowry. Or so it appears.

Many of the characters from Jane Austen’s novel make their summer visit to Pemberley Manor; Charles and Jane Bingley and their two young daughters, Mr. Bennet sans Mrs. Bennet (with little explanation, but does she deserve one?), Mr. and Mrs. Gardiner, Lady Catherine de Bourgh and daughter Anne (quite a surprise which is thoughtfully explained), and Kitty Bennet who adds a bit of theatrical drama and energy to the palatial manor! New characters are included that blend in so seamlessly that it is a logical transition into this sequel. Ms. Bonavia-Hunt has full comand of Jane Austen’s style and knowledge of the plot and her characters. The letter that Mr. Collins writes to Darcy in application for the position of Rector is priceless. I never forget that this is not a Jane Austen novel, but her use of early 19th-century language and style is effortless and engaging.

The plot has many turns and surprises, shadowed by a lingering mystery which keeps one on edge and turning the next page to discover a resolution. I now understand why this novel holds such a special place in the Jane Austen sequel cannon. It is amazing to acknowledge that it was written close to sixty years ago before Jane Austen became a Hollywood star or pop cult icon. Ms. Bonavia-Hunt was writing for a genre that would not come to fruition for another fifty years and that is an incredible achievement. It is sad that we know so little about her or her motivations to write Pemberley Shades, but her legacy to us has withheld and will endure. In comparison to today’s plethora of Austen sequels about, it reigns in my estimation as one of the best ever written.

Rating: 4 out of 5 Regency Stars

8 thoughts on “Pemberley Shades: Pride and Prejudice Continues, by D. A. Bonavia-Hunt – A Review”